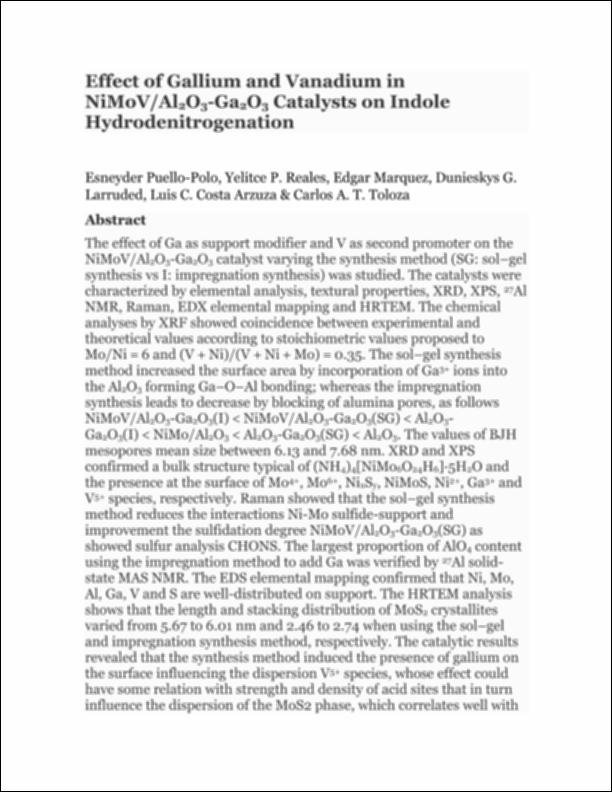 The effect of Ga as support modifier and V as second promoter on the NiMoV/Al2O3-Ga2O3 catalyst varying the synthesis method (SG: sol–gel synthesis vs I: impregnation synthesis) was studied. The catalysts were characterized by elemental analysis, textural properties, XRD, XPS, 27Al NMR, Raman, EDX elemental mapping and HRTEM. The chemical analyses by XRF showed coincidence between experimental and theoretical values according to stoichiometric values proposed to Mo/Ni = 6 and (V + Ni)/(V + Ni + Mo) = 0.35. The sol–gel synthesis method increased the surface area by incorporation of Ga3+ ions into the Al2O3 forming Ga–O–Al bonding; whereas the impregnation synthesis leads to decrease by blocking of alumina pores, as follows NiMoV/Al2O3-Ga2O3(I) < NiMoV/Al2O3-Ga2O3(SG) < Al2O3-Ga2O3(I) < NiMo/Al2O3 < Al2O3-Ga2O3(SG) < Al2O3. The values of BJH mesopores mean size between 6.13 and 7.68 nm. XRD and XPS confirmed a bulk structure typical of (NH4)4[NiMo6O24H6]·5H2O and the presence at the surface of Mo4+, Mo6+, NixSy, NiMoS, Ni2+, Ga3+ and V5+ species, respectively. Raman showed that the sol–gel synthesis method reduces the interactions Ni-Mo sulfide-support and improvement the sulfidation degree NiMoV/Al2O3-Ga2O3(SG) as showed sulfur analysis CHONS. The largest proportion of AlO4 content using the impregnation method to add Ga was verified by 27Al solid-state MAS NMR. The EDS elemental mapping confirmed that Ni, Mo, Al, Ga, V and S are well-distributed on support. The HRTEM analysis shows that the length and stacking distribution of MoS2 crystallites varied from 5.67 to 6.01 nm and 2.46 to 2.74 when using the sol–gel and impregnation synthesis method, respectively. The catalytic results revealed that the synthesis method induced the presence of gallium on the surface influencing the dispersion V5+ species, whose effect could have some relation with strength and density of acid sites that in turn influence the dispersion of the MoS2 phase, which correlates well with the indole HDN activities. The activities as indole HDN pseudo-first-order rate constants’ values (kHDN) from 0.29 to 2.78 mol/(m2·h): NiMoV/Al2O3 < NiMoV/Al2O3-Ga2O3(I) < NiMo/Al2O3 < NiMoV/Al2O3-Ga2O3(SG). Nevertheless, the nature of the active site can be related with reaction pathways, that is, NiMoV/Al2O3-Ga2O3(SG) and NiMoV/Al2O3-Ga2O3(I) catalysts produce ECH through HIND, while NiMoV/Al2O3 and NiMo/Al2O3 produce EB by hydrogenolysis of HIND to OEA. In the regard, the Ga and V act as structural promoters in the NiMo catalysts, allowing the largest generation of NiMoS M-edge-like and BRIM sites for HDN.
Collections