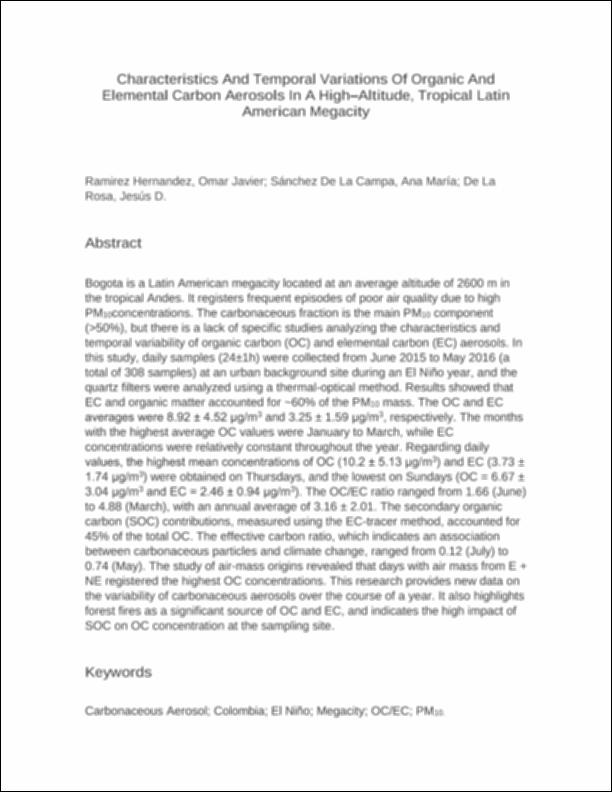 Bogota is a Latin American megacity located at an average altitude of 2600 m in the tropical Andes. It registers frequent episodes of poor air quality due to high PM10 concentrations. The carbonaceous fraction is the main PM10 component (>50%), but there is a lack of specific studies analyzing the characteristics and temporal variability of organic carbon (OC) and elemental carbon (EC) aerosols. In this study, daily samples (24±1h) were collected from June 2015 to May 2016 (a total of 308 samples) at an urban background site during an El Niño year, and the quartz filters were analyzed using a thermal-optical method. Results showed that EC and organic matter accounted for ~60% of the PM10 mass. The OC and EC averages were 8.92 ± 4.52 μg/m3 and 3.25 ± 1.59 μg/m3, respectively. The months with the highest average OC values were January to March, while EC concentrations were relatively constant throughout the year. Regarding daily values, the highest mean concentrations of OC (10.2 ± 5.13 μg/m3) and EC (3.73 ± 1.74 μg/m3) were obtained on Thursdays, and the lowest on Sundays (OC = 6.67 ± 3.04 μg/m3 and EC = 2.46 ± 0.94 μg/m3). The OC/EC ratio ranged from 1.66 (June) to 4.88 (March), with an annual average of 3.16 ± 2.01. The secondary organic carbon (SOC) contributions, measured using the EC-tracer method, accounted for 45% of the total OC. The effective carbon ratio, which indicates an association between carbonaceous particles and climate change, ranged from 0.12 (July) to 0.74 (May). The study of air-mass origins revealed that days with air mass from E + NE registered the highest OC concentrations. This research provides new data on the variability of carbonaceous aerosols over the course of a year. It also highlights forest fires as a significant source of OC and EC, and indicates the high impact of SOC on OC concentration at the sampling site.
Collections