Organizational resilience and performance: an analysis of the relevance of suppliers’ trade credit and bank diversification in the Spanish construction industry 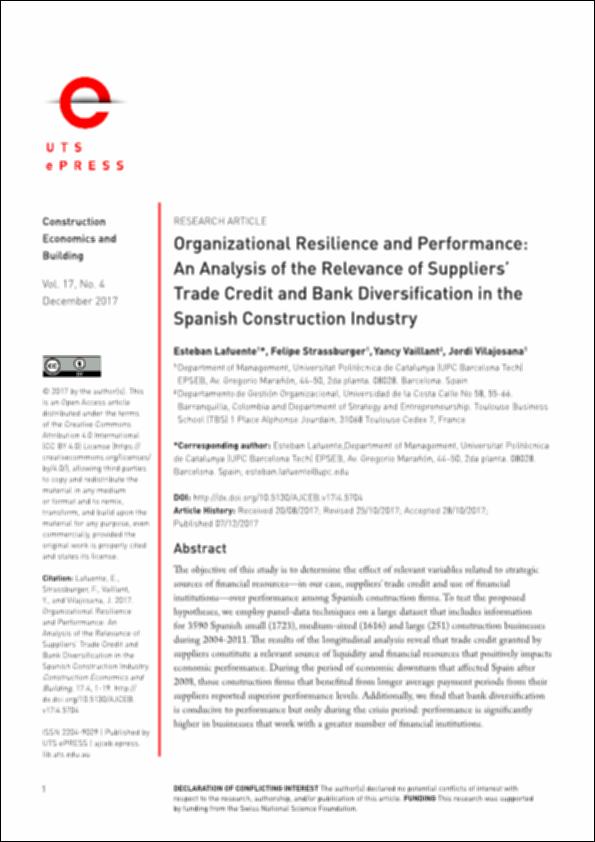 Organizational Resilience and Performance An Analysis of the Relevance of Suppliers’ Trade Credit and Bank Diversification in the Spanish Construction Industry (601.0Kb)
Author

The objective of this study is to determine the effect of relevant variables related to strategic sources of financial resources—in our case, suppliers’ trade credit and use of financial institutions—over performance among Spanish construction firms. To test the proposed hypotheses, we employ panel-data techniques on a large dataset that includes information for 3590 Spanish small (1723), medium-sized (1616) and large (251) construction businesses during 2004-2011. The results of the longitudinal analysis reveal that trade credit granted by suppliers constitute a relevant source of liquidity and financial resources that positively impacts economic performance. During the period of economic downturn that affected Spain after 2008, those construction firms that benefited from longer average payment periods from their suppliers reported superior performance levels. Additionally, we find that bank diversification is conducive to performance but only during the crisis period: performance is significantly higher in businesses that work with a greater number of financial institutions.
Collections