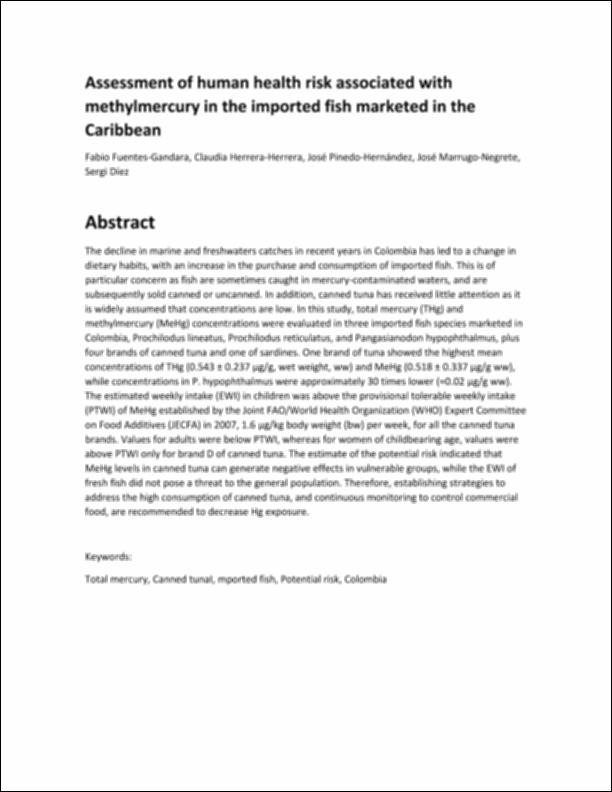 Assessment of human health risk associated with methylmercury in the imported fish marketed in the Caribbean.pdf (179.9Kb)
Author

The decline in marine and freshwaters catches in recent years in Colombia has led to a change in dietary habits, with an increase in the purchase and consumption of imported fish. This is of particular concern as fish are sometimes caught in mercury-contaminated waters, and are subsequently sold canned or uncanned. In addition, canned tuna has received little attention as it is widely assumed that concentrations are low. In this study, total mercury (THg) and methylmercury (MeHg) concentrations were evaluated in three imported fish species marketed in Colombia, Prochilodus lineatus, Prochilodus reticulatus, and Pangasianodon hypophthalmus, plus four brands of canned tuna and one of sardines. One brand of tuna showed the highest mean concentrations of THg (0.543 ± 0.237 μg/g, wet weight, ww) and MeHg (0.518 ± 0.337 μg/g ww), while concentrations in P. hypophthalmus were approximately 30 times lower (≈0.02 µg/g ww). The estimated weekly intake (EWI) in children was above the provisional tolerable weekly intake (PTWI) of MeHg established by the Joint FAO/World Health Organization (WHO) Expert Committee on Food Additives (JECFA) in 2007, 1.6 μg/kg body weight (bw) per week, for all the canned tuna brands. Values for adults were below PTWI, whereas for women of childbearing age, values were above PTWI only for brand D of canned tuna. The estimate of the potential risk indicated that MeHg levels in canned tuna can generate negative effects in vulnerable groups, while the EWI of fresh fish did not pose a threat to the general population. Therefore, establishing strategies to address the high consumption of canned tuna, and continuous monitoring to control commercial food, are recommended to decrease Hg exposure.
Collections