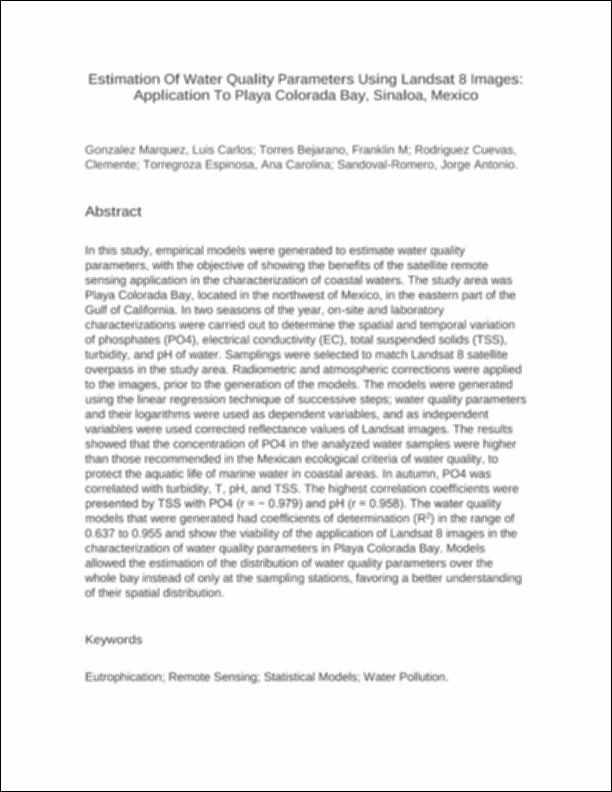 In this study, empirical models were generated to estimate water quality parameters, with the objective of showing the benefits of the satellite remote sensing application in the characterization of coastal waters. The study area was Playa Colorada Bay, located in the northwest of Mexico, in the eastern part of the Gulf of California. In two seasons of the year, on-site and laboratory characterizations were carried out to determine the spatial and temporal variation of phosphates (PO4), electrical conductivity (EC), total suspended solids (TSS), turbidity, and pH of water. Samplings were selected to match Landsat 8 satellite overpass in the study area. Radiometric and atmospheric corrections were applied to the images, prior to the generation of the models. The models were generated using the linear regression technique of successive steps; water quality parameters and their logarithms were used as dependent variables, and as independent variables were used corrected reflectance values of Landsat images. The results showed that the concentration of PO4 in the analyzed water samples were higher than those recommended in the Mexican ecological criteria of water quality, to protect the aquatic life of marine water in coastal areas. In autumn, PO4 was correlated with turbidity, T, pH, and TSS. The highest correlation coefficients were presented by TSS with PO4 (r = − 0.979) and pH (r = 0.958). The water quality models that were generated had coefficients of determination (R2) in the range of 0.637 to 0.955 and show the viability of the application of Landsat 8 images in the characterization of water quality parameters in Playa Colorada Bay. Models allowed the estimation of the distribution of water quality parameters over the whole bay instead of only at the sampling stations, favoring a better understanding of their spatial distribution.
Collections