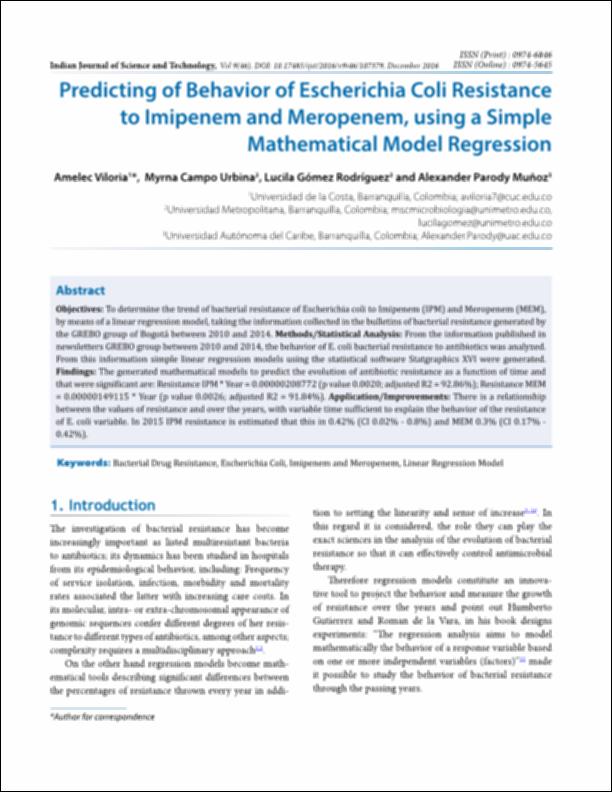 Objectives: To determine the trend of bacterial resistance of Escherichia coli to Imipenem (IPM) and Meropenem (MEM), by means of a linear regression model, taking the information collected in the bulletins of bacterial resistance generated by the GREBO group of Bogotá between 2010 and 2014. Methods/Statistical Analysis: From the information published in newsletters GREBO group between 2010 and 2014, the behavior of E. coli bacterial resistance to antibiotics was analyzed. From this information simple linear regression models using the statistical software Statgraphics XVI were generated. Findings: The generated mathematical models to predict the evolution of antibiotic resistance as a function of time and that were significant are: Resistance IPM * Year = 0.00000208772 (p value 0.0020; adjusted R2 = 92.86%); Resistance MEM = 0.00000149115 * Year (p value 0.0026; adjusted R2 = 91.84%). Application/Improvements: There is a relationship between the values of resistance and over the years, with variable time sufficient to explain the behavior of the resistance of E. coli variable. In 2015 IPM resistance is estimated that this in 0.42% (CI 0.02% - 0.8%) and MEM 0.3% (CI 0.17% - 0.42%).
Collections