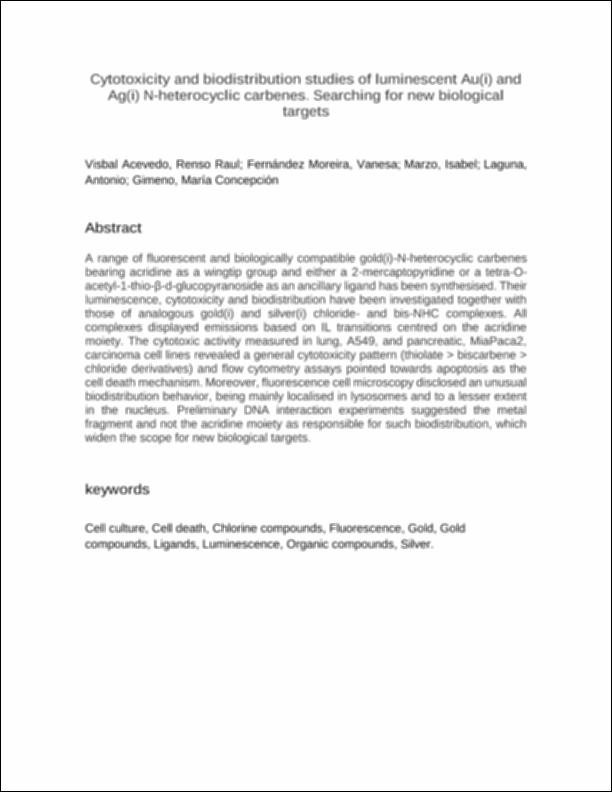 A range of fluorescent and biologically compatible gold(i)-N-heterocyclic carbenes bearing acridine as a wingtip group and either a 2-mercaptopyridine or a tetra-O-acetyl-1-thio-β-d-glucopyranoside as an ancillary ligand has been synthesised. Their luminescence, cytotoxicity and biodistribution have been investigated together with those of analogous gold(i) and silver(i) chloride- and bis-NHC complexes. All complexes displayed emissions based on IL transitions centred on the acridine moiety. The cytotoxic activity measured in lung, A549, and pancreatic, MiaPaca2, carcinoma cell lines revealed a general cytotoxicity pattern (thiolate > biscarbene > chloride derivatives) and flow cytometry assays pointed towards apoptosis as the cell death mechanism. Moreover, fluorescence cell microscopy disclosed an unusual biodistribution behavior, being mainly localised in lysosomes and to a lesser extent in the nucleus. Preliminary DNA interaction experiments suggested the metal fragment and not the acridine moiety as responsible for such biodistribution, which widen the scope for new biological targets.
Collections