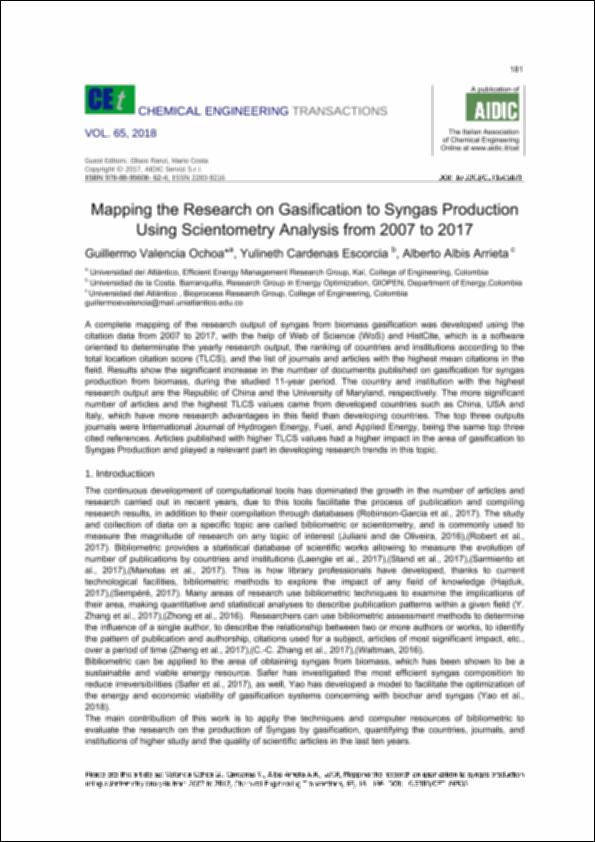 Mapping the research on gasification to syngas production using scientometry analysis from 2007 to 2017.pdf (821.1Kb)
Author

A complete mapping of the research output of syngas from biomass gasification was developed using the citation data from 2007 to 2017, with the help of Web of Science (WoS) and HistCite, which is a software oriented to determinate the yearly research output, the ranking of countries and institutions according to the total location citation score (TLCS), and the list of journals and articles with the highest mean citations in the field. Results show the significant increase in the number of documents published on gasification for syngas production from biomass, during the studied 11-year period. The country and institution with the highest research output are the Republic of China and the University of Maryland, respectively. The more significant number of articles and the highest TLCS values came from developed countries such as China, USA and Italy, which have more research advantages in this field than developing countries. The top three outputs journals were International Journal of Hydrogen Energy, Fuel, and Applied Energy, being the same top three cited references. Articles published with higher TLCS values had a higher impact in the area of gasification to Syngas Production and played a relevant part in developing research trends in this topic.
Collections