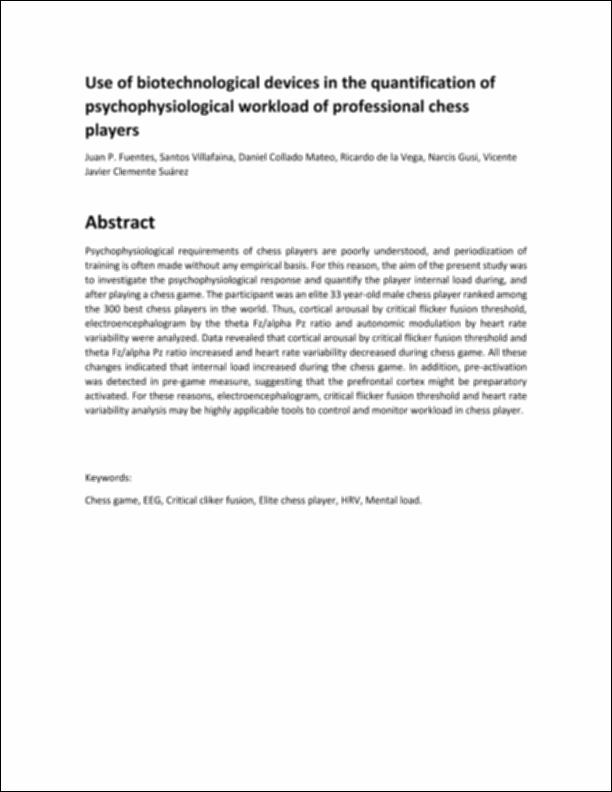 Use of Biotechnological Devices in the Quantification of Psychophysiological Workload of Professional Chess Players.pdf (174.5Kb)
Author

Psychophysiological requirements of chess players are poorly understood, and periodization of training is often made without any empirical basis. For this reason, the aim of the present study was to investigate the psychophysiological response and quantify the player internal load during, and after playing a chess game. The participant was an elite 33 year-old male chess player ranked among the 300 best chess players in the world. Thus, cortical arousal by critical flicker fusion threshold, electroencephalogram by the theta Fz/alpha Pz ratio and autonomic modulation by heart rate variability were analyzed. Data revealed that cortical arousal by critical flicker fusion threshold and theta Fz/alpha Pz ratio increased and heart rate variability decreased during chess game. All these changes indicated that internal load increased during the chess game. In addition, pre-activation was detected in pre-game measure, suggesting that the prefrontal cortex might be preparatory activated. For these reasons, electroencephalogram, critical flicker fusion threshold and heart rate variability analysis may be highly applicable tools to control and monitor workload in chess player.
Collections