Process control in the geneses and evolution of a lagoon-barrier system inside of the patos lagoon, south of Brazil 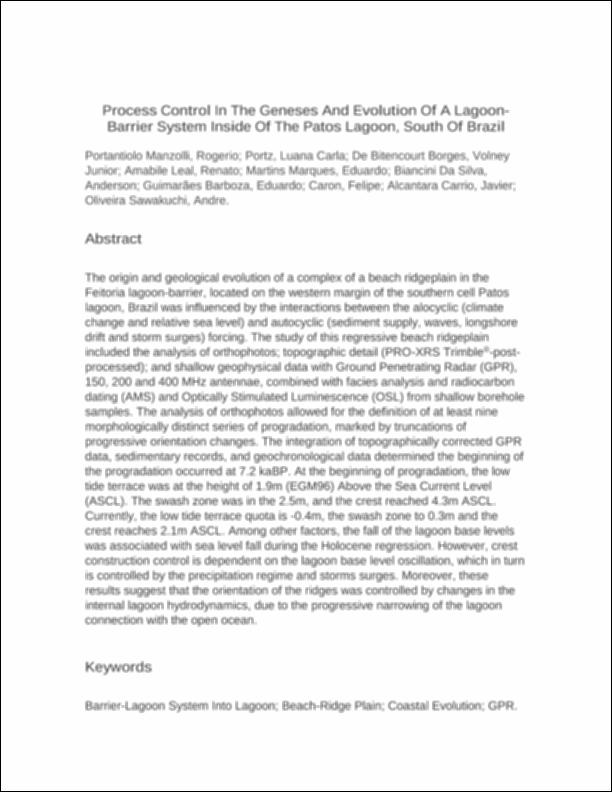 Process Control In The Geneses And Evolution (178.2Kb)
Author

The origin and geological evolution of a complex of a beach ridgeplain in the Feitoria lagoon-barrier, located on the western margin of the southern cell Patos lagoon, Brazil was influenced by the interactions between the alocyclic (climate change and relative sea level) and autocyclic (sediment supply, waves, longshore drift and storm surges) forcing. The study of this regressive beach ridgeplain included the analysis of orthophotos; topographic detail (PRO-XRS Trimble®-post-processed); and shallow geophysical data with Ground Penetrating Radar (GPR), 150, 200 and 400 MHz antennae, combined with facies analysis and radiocarbon dating (AMS) and Optically Stimulated Luminescence (OSL) from shallow borehole samples. The analysis of orthophotos allowed for the definition of at least nine morphologically distinct series of progradation, marked by truncations of progressive orientation changes. The integration of topographically corrected GPR data, sedimentary records, and geochronological data determined the beginning of the progradation occurred at 7.2 kaBP. At the beginning of progradation, the low tide terrace was at the height of 1.9m (EGM96) Above the Sea Current Level (ASCL). The swash zone was in the 2.5m, and the crest reached 4.3m ASCL. Currently, the low tide terrace quota is -0.4m, the swash zone to 0.3m and the crest reaches 2.1m ASCL. Among other factors, the fall of the lagoon base levels was associated with sea level fall during the Holocene regression. However, crest construction control is dependent on the lagoon base level oscillation, which in turn is controlled by the precipitation regime and storms surges. Moreover, these results suggest that the orientation of the ridges was controlled by changes in the internal lagoon hydrodynamics, due to the progressive narrowing of the lagoon connection with the open ocean.
Collections