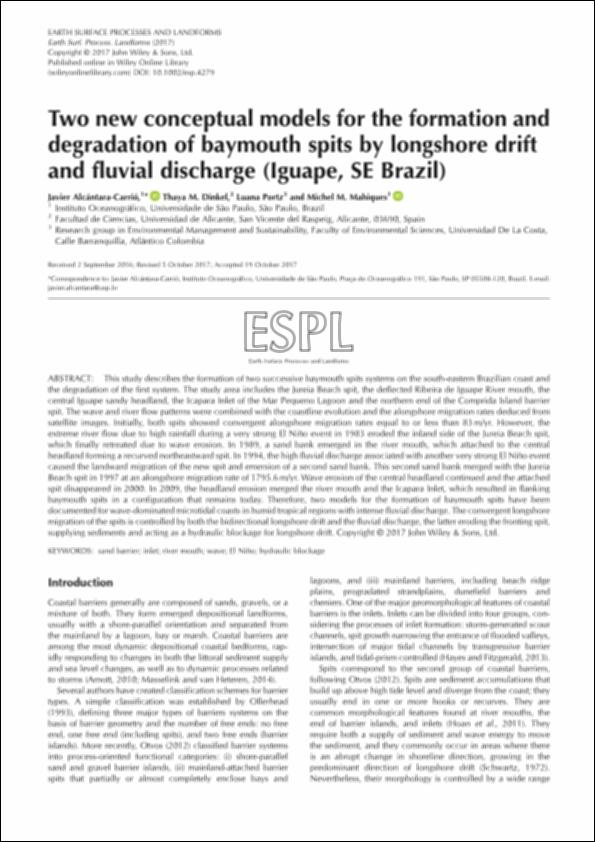 This study describes the formation of two successive baymouth spits systems on the south-eastern Brazilian coast and the degradation of the first system. The study area includes the Jureia Beach spit, the deflected Ribeira de Iguape River mouth, the central Iguape sandy headland, the Icapara Inlet of the Mar Pequeno Lagoon and the northern end of the Comprida Island barrier spit. The wave and river flow patterns were combined with the coastline evolution and the alongshore migration rates deduced from satellite images. Initially, both spits showed convergent alongshore migration rates equal to or less than 83 m/yr. However, the extreme river flow due to high rainfall during a very strong El Niño event in 1983 eroded the inland side of the Jureia Beach spit, which finally retreated due to wave erosion. In 1989, a sand bank emerged in the river mouth, which attached to the central headland forming a recurved northeastward spit. In 1994, the high fluvial discharge associated with another very strong El Niño event caused the landward migration of the new spit and emersion of a second sand bank. This second sand bank merged with the Jureia Beach spit in 1997 at an alongshore migration rate of 1795.6 m/yr. Wave erosion of the central headland continued and the attached spit disappeared in 2000. In 2009, the headland erosion merged the river mouth and the Icapara Inlet, which resulted in flanking baymouth spits in a configuration that remains today. Therefore, two models for the formation of baymouth spits have been documented for wave-dominated microtidal coasts in humid tropical regions with intense fluvial discharge. The convergent longshore migration of the spits is controlled by both the bidirectional longshore drift and the fluvial discharge, the latter eroding the fronting spit, supplying sediments and acting as a hydraulic blockage for longshore drift.
Collections