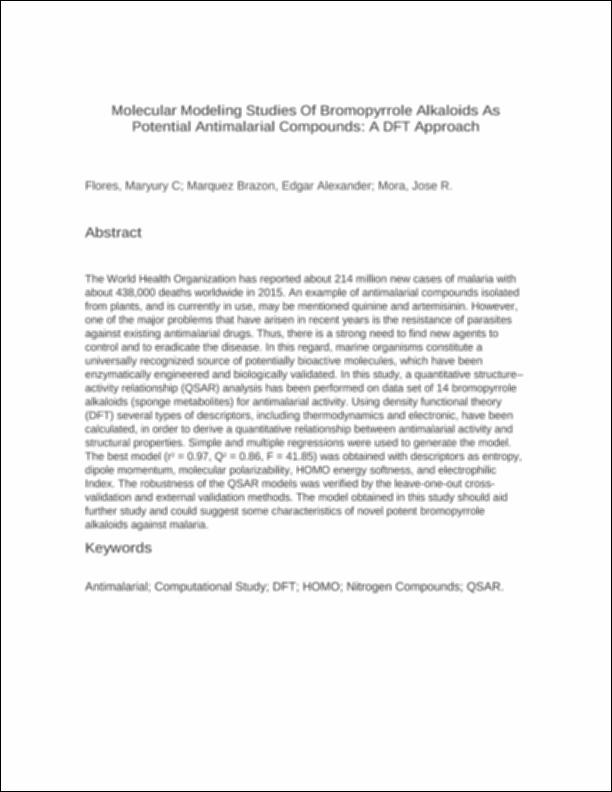 The World Health Organization has reported about 214 million new cases of malaria with about 438,000 deaths worldwide in 2015. An example of antimalarial compounds isolated from plants, and is currently in use, may be mentioned quinine and artemisinin. However, one of the major problems that have arisen in recent years is the resistance of parasites against existing antimalarial drugs. Thus, there is a strong need to find new agents to control and to eradicate the disease. In this regard, marine organisms constitute a universally recognized source of potentially bioactive molecules, which have been enzymatically engineered and biologically validated. In this study, a quantitative structure–activity relationship (QSAR) analysis has been performed on data set of 14 bromopyrrole alkaloids (sponge metabolites) for antimalarial activity. Using density functional theory (DFT) several types of descriptors, including thermodynamics and electronic, have been calculated, in order to derive a quantitative relationship between antimalarial activity and structural properties. Simple and multiple regressions were used to generate the model. The best model (r2 = 0.97, Q2 = 0.86, F = 41.85) was obtained with descriptors as entropy, dipole momentum, molecular polarizability, HOMO energy softness, and electrophilic Index. The robustness of the QSAR models was verified by the leave-one-out cross-validation and external validation methods. The model obtained in this study should aid further study and could suggest some characteristics of novel potent bromopyrrole alkaloids against malaria.
Collections