Effect of temperature in bursting of thalamic reticular cells 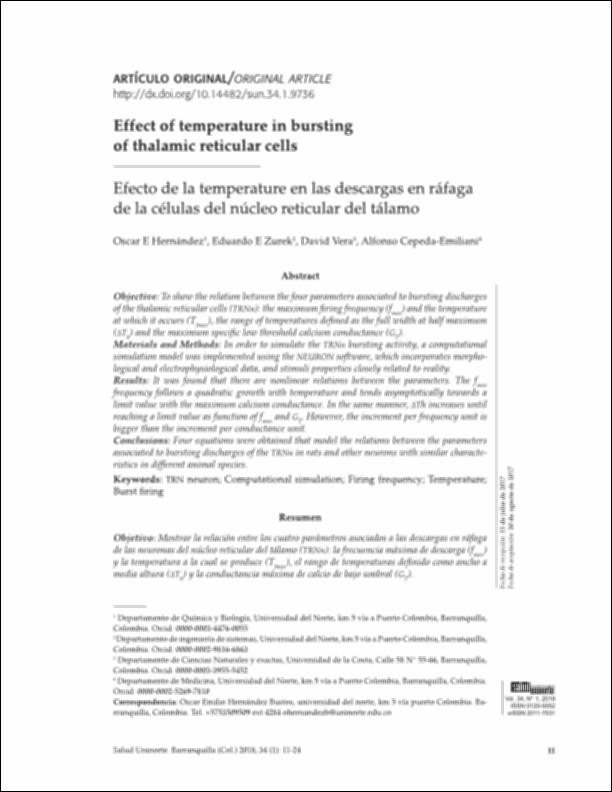 Objective: To show the relation between the four parameters associated to bursting discharges of the thalamic reticular cells (TRNn): the maximum firing frequency (fmax) and the temperature at which it occurs (Tfmax), the range of temperatures defined as the full width at half maximum (∆Th ) and the maximum specific low threshold calcium conductance (GT). Materials and Methods: In order to simulate the TRNn bursting activity, a computational simulation model was implemented using the NEURON software, which incorporates morphological and electrophysiological data, and stimuli properties closely related to reality. Results: It was found that there are nonlinear relations between the parameters. The fmax frequency follows a quadratic growth with temperature and tends asymptotically towards a limit value with the maximum calcium conductance. In the same manner, ∆Th increases until reaching a limit value as function of fmax and GT . However, the increment per frequency unit is bigger than the increment per conductance unit. Conclusions: Four equations were obtained that model the relations between the parameters associated to bursting discharges of the TRNn in rats and other neurons with similar characteristics in different animal species.
Collections