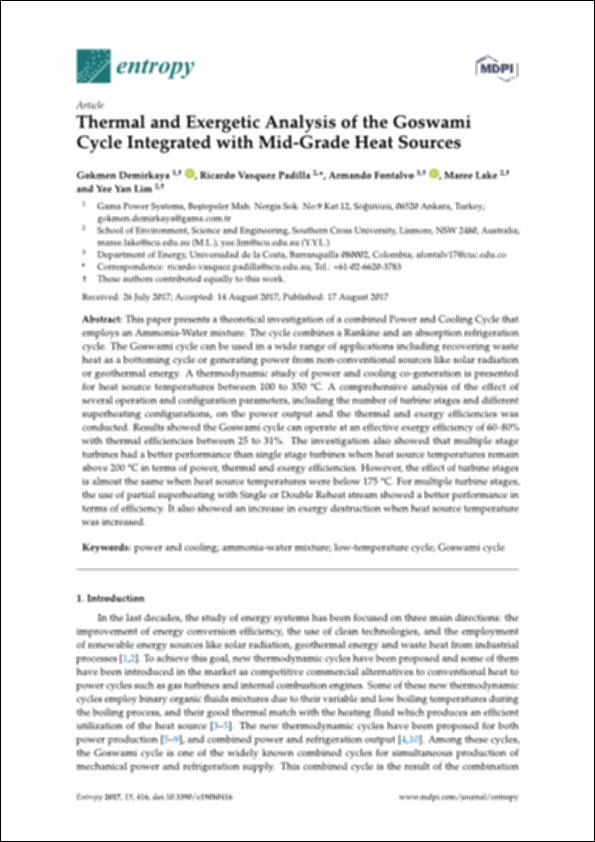 Thermal and Exergetic Analysis of the Goswami (1.024Mb)
Author

This paper presents a theoretical investigation of a combined Power and Cooling Cycle that employs an Ammonia-Water mixture. The cycle combines a Rankine and an absorption refrigeration cycle. The Goswami cycle can be used in a wide range of applications including recovering waste heat as a bottoming cycle or generating power from non-conventional sources like solar radiation or geothermal energy. A thermodynamic study of power and cooling co-generation is presented for heat source temperatures between 100 to 350 °C. A comprehensive analysis of the effect of several operation and configuration parameters, including the number of turbine stages and different superheating configurations, on the power output and the thermal and exergy efficiencies was conducted. Results showed the Goswami cycle can operate at an effective exergy efficiency of 60-80% with thermal efficiencies between 25 to 31%. The investigation also showed that multiple stage turbines had a better performance than single stage turbines when heat source temperatures remain above 200 °C in terms of power, thermal and exergy efficiencies. However, the effect of turbine stages is almost the same when heat source temperatures were below 175 °C. For multiple turbine stages, the use of partial superheating with Single or Double Reheat stream showed a better performance in terms of efficiency. It also showed an increase in exergy destruction when heat source temperature was increased.
Collections