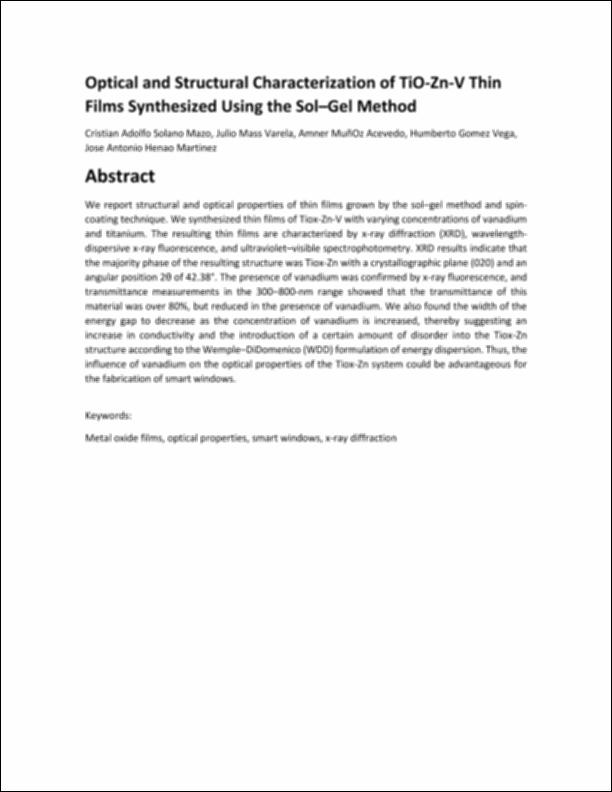 We report structural and optical properties of thin films grown by the sol–gel method and spin-coating technique. We synthesized thin films of Tiox-Zn-V with varying concentrations of vanadium and titanium. The resulting thin films are characterized by x-ray diffraction (XRD), wavelength-dispersive x-ray fluorescence, and ultraviolet–visible spectrophotometry. XRD results indicate that the majority phase of the resulting structure was Tiox-Zn with a crystallographic plane (020) and an angular position 2θ of 42.38°. The presence of vanadium was confirmed by x-ray fluorescence, and transmittance measurements in the 300–800-nm range showed that the transmittance of this material was over 80%, but reduced in the presence of vanadium. We also found the width of the energy gap to decrease as the concentration of vanadium is increased, thereby suggesting an increase in conductivity and the introduction of a certain amount of disorder into the Tiox-Zn structure according to the Wemple–DiDomenico (WDD) formulation of energy dispersion. Thus, the influence of vanadium on the optical properties of the Tiox-Zn system could be advantageous for the fabrication of smart windows.
Collections