Global, Regional, And National Cancer Incidence, Mortality, Years Of Life Lost, Years Lived With Disability, And Disability-Adjusted Life-Years For 29 Cancer Groups, 1990 To 2016: A Systematic Analysis For The Global Burden Of Disease Study 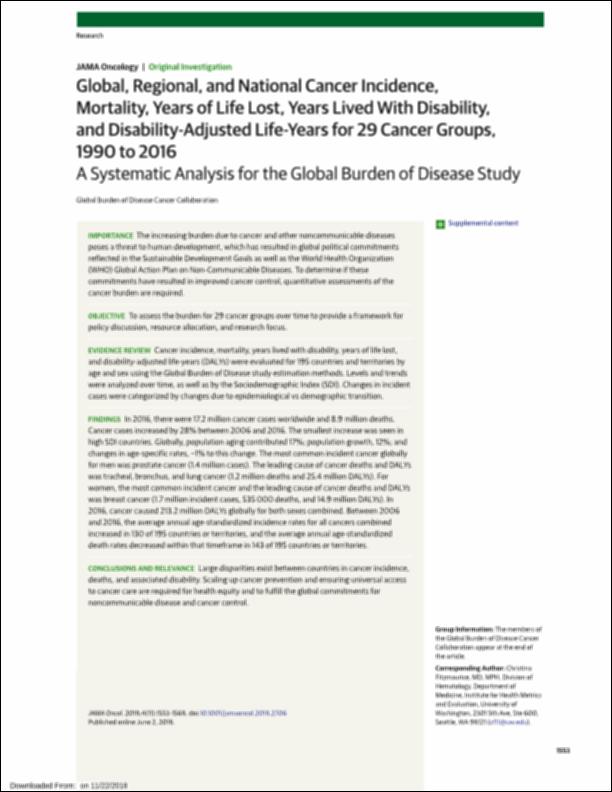 Importance: The increasing burden due to cancer and other noncommunicable diseases poses a threat to human development, which has resulted in global political commitments reflected in the Sustainable Development Goals as well as the World Health Organization (WHO) Global Action Plan on Non-Communicable Diseases. To determine if these commitments have resulted in improved cancer control, quantitative assessments of the cancer burden are required. Objective: To assess the burden for 29 cancer groups over time to provide a framework for policy discussion, resource allocation, and research focus. Evidence Review: Cancer incidence, mortality, years lived with disability, years of life lost, and disability-adjusted life-years (DALYs) were evaluated for 195 countries and territories by age and sex using the Global Burden of Disease study estimation methods. Levels and trends were analyzed over time, as well as by the Sociodemographic Index (SDI). Changes in incident cases were categorized by changes due to epidemiological vs demographic transition. Findings: In 2016, there were 17.2 million cancer cases worldwide and 8.9 million deaths. Cancer cases increased by 28% between 2006 and 2016. The smallest increase was seen in high SDI countries. Globally, population aging contributed 17%; population growth, 12%; and changes in age-specific rates, -1% to this change. The most common incident cancer globally for men was prostate cancer (1.4 million cases). The leading cause of cancer deaths and DALYs was tracheal, bronchus, and lung cancer (1.2 million deaths and 25.4 million DALYs). For women, the most common incident cancer and the leading cause of cancer deaths and DALYs was breast cancer (1.7 million incident cases, 535 000 deaths, and 14.9 million DALYs). In 2016, cancer caused 213.2 million DALYs globally for both sexes combined.
Collections