Concentrations and size distributions of fungal bioaerosols in a municipal landfill 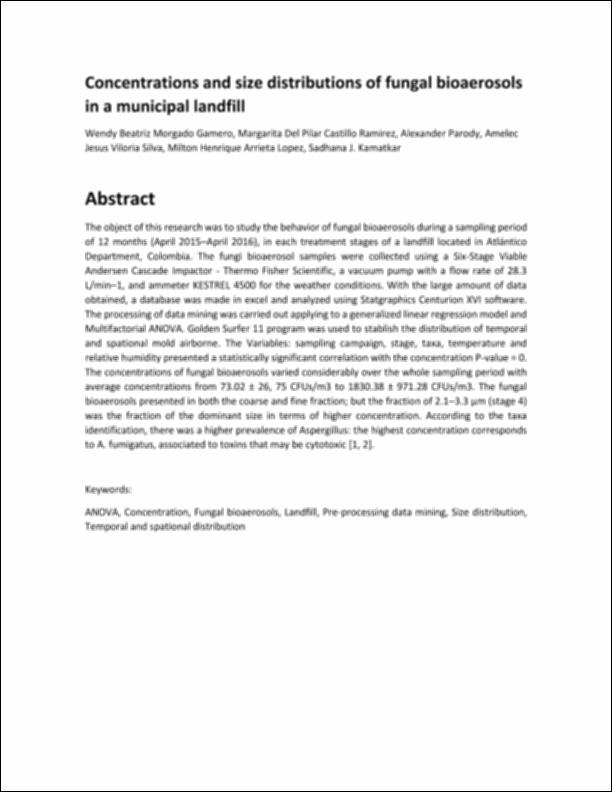 Concentrations and size distributions of fungal bioaerosols in a municipal landfill.pdf (181.4Kb)
Author

The object of this research was to study the behavior of fungal bioaerosols during a sampling period of 12 months (April 2015–April 2016), in each treatment stages of a landfill located in Atlántico Department, Colombia. The fungi bioaerosol samples were collected using a Six-Stage Viable Andersen Cascade Impactor - Thermo Fisher Scientific, a vacuum pump with a flow rate of 28.3 L/min–1, and ammeter KESTREL 4500 for the weather conditions. With the large amount of data obtained, a database was made in excel and analyzed using Statgraphics Centurion XVI software. The processing of data mining was carried out applying to a generalized linear regression model and Multifactorial ANOVA. Golden Surfer 11 program was used to stablish the distribution of temporal and spational mold airborne. The Variables: sampling campaign, stage, taxa, temperature and relative humidity presented a statistically significant correlation with the concentration P-value = 0. The concentrations of fungal bioaerosols varied considerably over the whole sampling period with average concentrations from 73.02 ± 26, 75 CFUs/m3 to 1830.38 ± 971.28 CFUs/m3. The fungal bioaerosols presented in both the coarse and fine fraction; but the fraction of 2.1–3.3 μm (stage 4) was the fraction of the dominant size in terms of higher concentration. According to the taxa identification, there was a higher prevalence of Aspergillus: the highest concentration corresponds to A. fumigatus, associated to toxins that may be cytotoxic [1, 2].
Collections