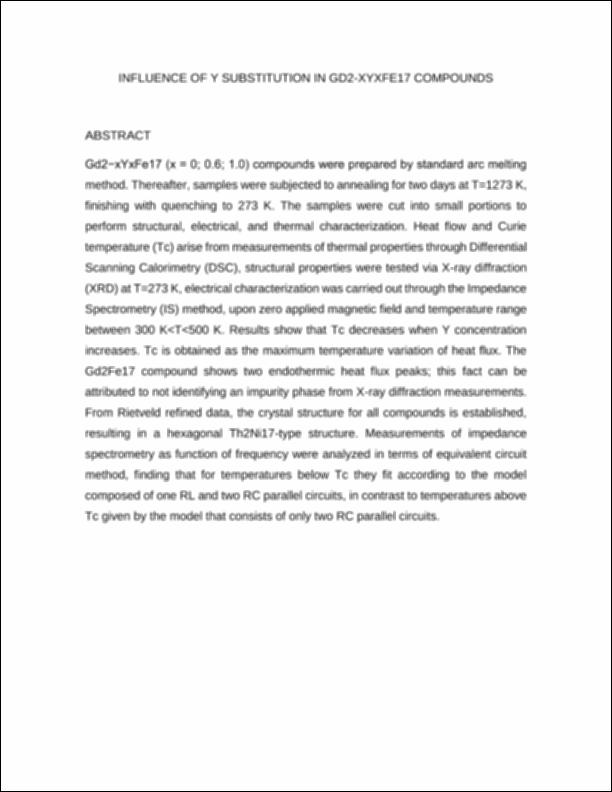 Gd2−xYxFe17 (x = 0; 0.6; 1.0) compounds were prepared by standard arc melting method. Thereafter, samples were subjected to annealing for two days at T=1273 K, finishing with quenching to 273 K. The samples were cut into small portions to perform structural, electrical, and thermal characterization. Heat flow and Curie temperature (Tc) arise from measurements of thermal properties through Differential Scanning Calorimetry (DSC), structural properties were tested via X-ray diffraction (XRD) at T=273 K, electrical characterization was carried out through the Impedance Spectrometry (IS) method, upon zero applied magnetic field and temperature range between 300 K<T<500 K. Results show that Tc decreases when Y concentration increases. Tc is obtained as the maximum temperature variation of heat flux. The Gd2Fe17 compound shows two endothermic heat flux peaks; this fact can be attributed to not identifying an impurity phase from X-ray diffraction measurements. From Rietveld refined data, the crystal structure for all compounds is established, resulting in a hexagonal Th2Ni17-type structure. Measurements of impedance spectrometry as function of frequency were analyzed in terms of equivalent circuit method, finding that for temperatures below Tc they fit according to the model composed of one RL and two RC parallel circuits, in contrast to temperatures above Tc given by the model that consists of only two RC parallel circuits.
Collections