The biomass based electricity generation potential of the Province of Cienfuegos, Cuba 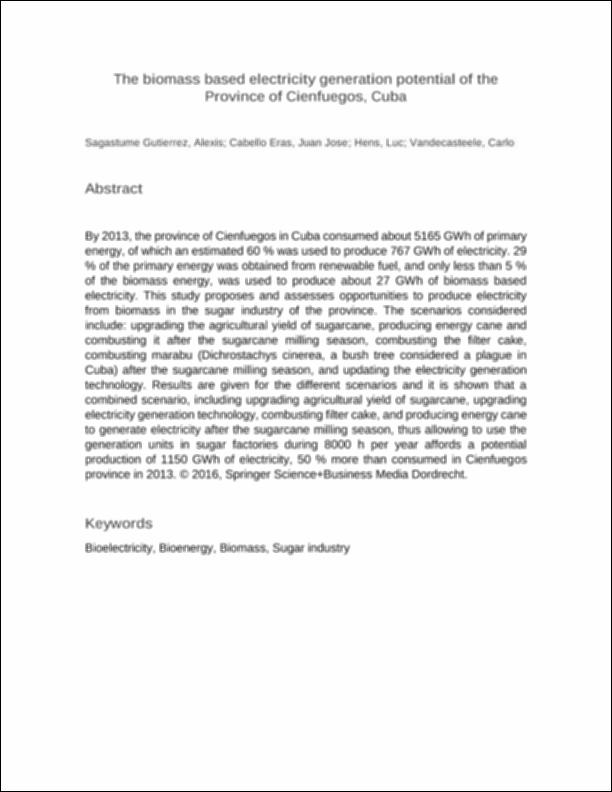 The biomass based electricity generation potential of the Province of Cienfuegos, Cuba.pdf (7.819Kb)
Author

By 2013, the province of Cienfuegos in Cuba consumed about 5165 GWh of primary energy, of which an estimated 60 % was used to produce 767 GWh of electricity. 29 % of the primary energy was obtained from renewable fuel, and only less than 5 % of the biomass energy, was used to produce about 27 GWh of biomass based electricity. This study proposes and assesses opportunities to produce electricity from biomass in the sugar industry of the province. The scenarios considered include: upgrading the agricultural yield of sugarcane, producing energy cane and combusting it after the sugarcane milling season, combusting the filter cake, combusting marabu (Dichrostachys cinerea, a bush tree considered a plague in Cuba) after the sugarcane milling season, and updating the electricity generation technology. Results are given for the different scenarios and it is shown that a combined scenario, including upgrading agricultural yield of sugarcane, upgrading electricity generation technology, combusting filter cake, and producing energy cane to generate electricity after the sugarcane milling season, thus allowing to use the generation units in sugar factories during 8000 h per year affords a potential production of 1150 GWh of electricity, 50 % more than consumed in Cienfuegos province in 2013. © 2016, Springer Science+Business Media Dordrecht.
Collections