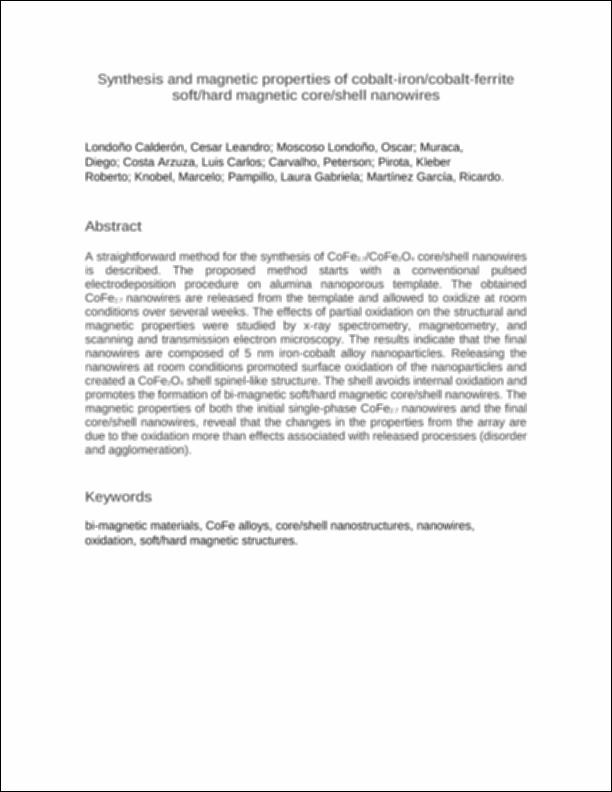 A straightforward method for the synthesis of CoFe2.7/CoFe2O4 core/shell nanowires is described. The proposed method starts with a conventional pulsed electrodeposition procedure on alumina nanoporous template. The obtained CoFe2.7 nanowires are released from the template and allowed to oxidize at room conditions over several weeks. The effects of partial oxidation on the structural and magnetic properties were studied by x-ray spectrometry, magnetometry, and scanning and transmission electron microscopy. The results indicate that the final nanowires are composed of 5 nm iron-cobalt alloy nanoparticles. Releasing the nanowires at room conditions promoted surface oxidation of the nanoparticles and created a CoFe2O4 shell spinel-like structure. The shell avoids internal oxidation and promotes the formation of bi-magnetic soft/hard magnetic core/shell nanowires. The magnetic properties of both the initial single-phase CoFe2.7 nanowires and the final core/shell nanowires, reveal that the changes in the properties from the array are due to the oxidation more than effects associated with released processes (disorder and agglomeration).
Collections