Intrafamilial variable phenotype including corticobasal syndrome in a family with p.P301L mutation in the MAPT gene: first report in South America 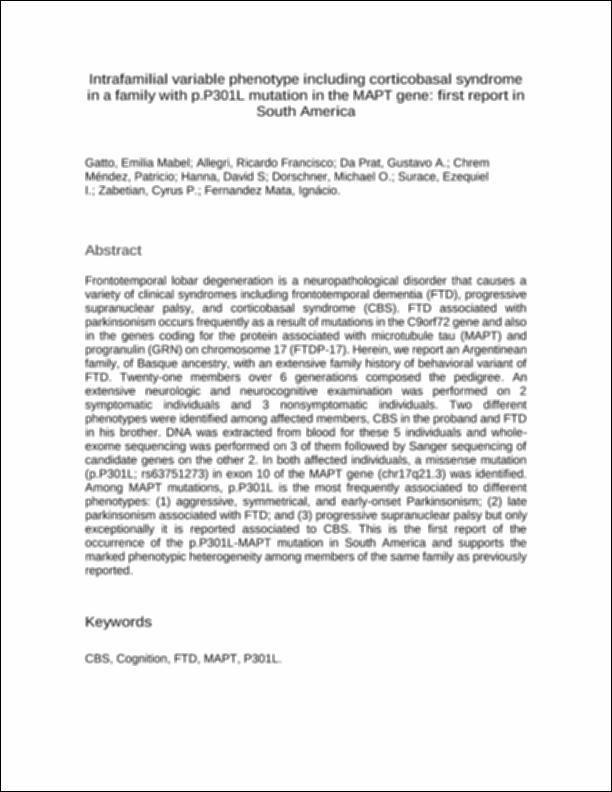 Frontotemporal lobar degeneration is a neuropathological disorder that causes a variety of clinical syndromes including frontotemporal dementia (FTD), progressive supranuclear palsy, and corticobasal syndrome (CBS). FTD associated with parkinsonism occurs frequently as a result of mutations in the C9orf72 gene and also in the genes coding for the protein associated with microtubule tau (MAPT) and progranulin (GRN) on chromosome 17 (FTDP-17). Herein, we report an Argentinean family, of Basque ancestry, with an extensive family history of behavioral variant of FTD. Twenty-one members over 6 generations composed the pedigree. An extensive neurologic and neurocognitive examination was performed on 2 symptomatic individuals and 3 nonsymptomatic individuals. Two different phenotypes were identified among affected members, CBS in the proband and FTD in his brother. DNA was extracted from blood for these 5 individuals and whole-exome sequencing was performed on 3 of them followed by Sanger sequencing of candidate genes on the other 2. In both affected individuals, a missense mutation (p.P301L; rs63751273) in exon 10 of the MAPT gene (chr17q21.3) was identified. Among MAPT mutations, p.P301L is the most frequently associated to different phenotypes: (1) aggressive, symmetrical, and early-onset Parkinsonism; (2) late parkinsonism associated with FTD; and (3) progressive supranuclear palsy but only exceptionally it is reported associated to CBS. This is the first report of the occurrence of the p.P301L-MAPT mutation in South America and supports the marked phenotypic heterogeneity among members of the same family as previously reported.
Collections