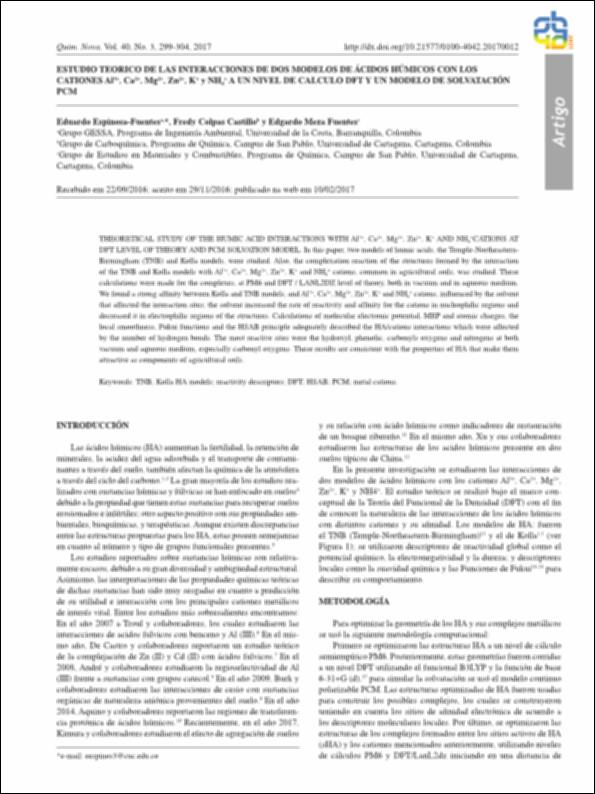 In this paper, two models of humic acids, the Temple-Northeastern-Birmingham (TNB) and Kolla models, were studied. Also, the complexation reaction of the structures formed by the interaction of the TNB and Kolla models with Al3+, Ca2+, Mg2+, Zn2+, K+ and NH4+ cations, common in agricultural soils, was studied. These calculations were made for the complexes, at PM6 and DFT/LANL2DZ level of theory, both in vacuum and in aqueous medium. We found a strong affinity between Kolla and TNB models, and Al3+, Ca2+, Mg2+, Zn2+, K+ and NH4+ cations, influenced by the solvent that affected the interaction sites; the solvent increased the rate of reactivity and affinity for the cations in nucleophilic regions and decreased it in electrophilic regions of the structures. Calculations of molecular electronic potential, MEP and atomic charges, the local smoothness, Fukui functions and the HSAB principle adequately described the HA/cations interactions which were affected by the number of hydrogen bonds. The most reactive sites were the hydroxyl, phenolic, carbonyls oxygens and nitrogens at both vacuum and aqueous medium, especially carbonyl oxygens. These results are consistent with the properties of HA that make them attractive as components of agricultural soils.
Collections