Hierarchical ascending classification: An application to contraband apprehensions in Colombia (2015–2016) 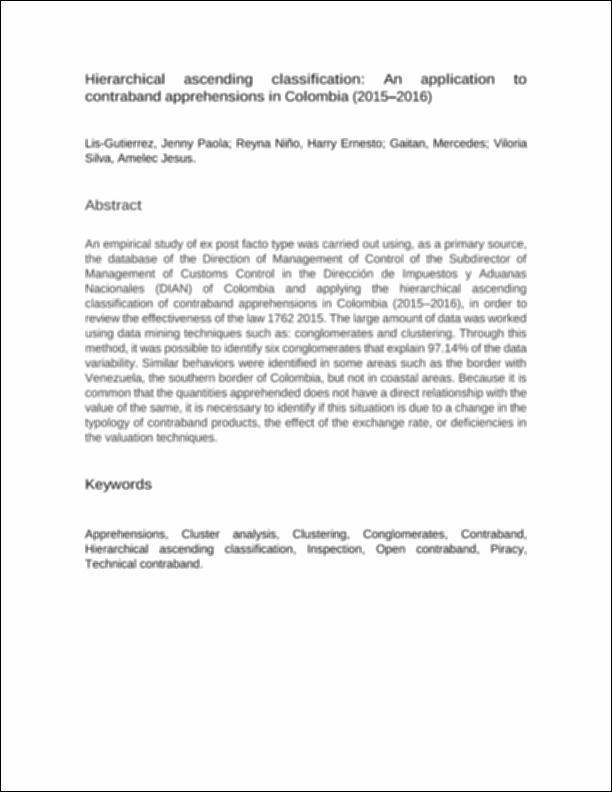 An empirical study of ex post facto type was carried out using, as a primary source, the database of the Direction of Management of Control of the Subdirector of Management of Customs Control in the Dirección de Impuestos y Aduanas Nacionales (DIAN) of Colombia and applying the hierarchical ascending classification of contraband apprehensions in Colombia (2015–2016), in order to review the effectiveness of the law 1762 2015. The large amount of data was worked using data mining techniques such as: conglomerates and clustering. Through this method, it was possible to identify six conglomerates that explain 97.14% of the data variability. Similar behaviors were identified in some areas such as the border with Venezuela, the southern border of Colombia, but not in coastal areas. Because it is common that the quantities apprehended does not have a direct relationship with the value of the same, it is necessary to identify if this situation is due to a change in the typology of contraband products, the effect of the exchange rate, or deficiencies in the valuation techniques.
URI: http://hdl.handle.net/11323/1847
Collections