Use of the industrial property system for new creations in Colombia: A departmental analysis (2000–2016) 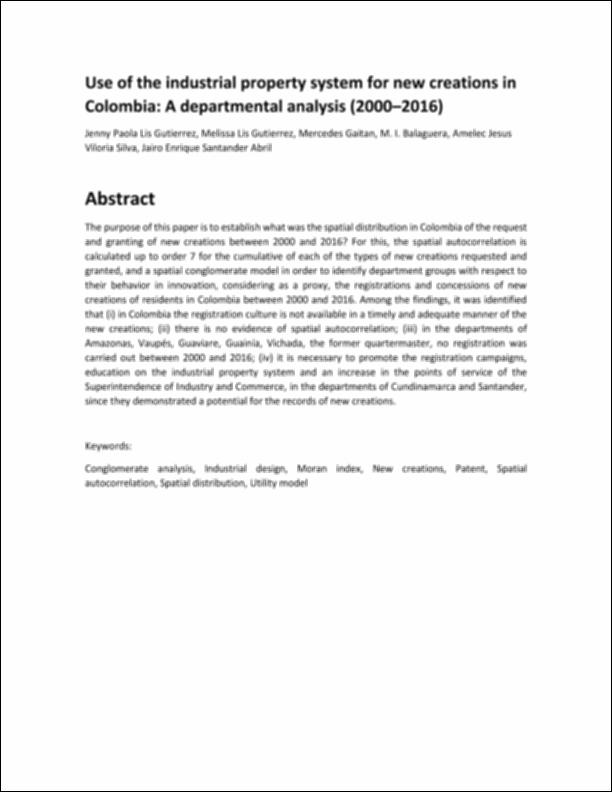 Use of the industrial property system for new creations in Colombia A departmental analysis (2000–2016).pdf (177.9Kb)
Author

The purpose of this paper is to establish what was the spatial distribution in Colombia of the request and granting of new creations between 2000 and 2016? For this, the spatial autocorrelation is calculated up to order 7 for the cumulative of each of the types of new creations requested and granted, and a spatial conglomerate model in order to identify department groups with respect to their behavior in innovation, considering as a proxy, the registrations and concessions of new creations of residents in Colombia between 2000 and 2016. Among the findings, it was identified that (i) in Colombia the registration culture is not available in a timely and adequate manner of the new creations; (ii) there is no evidence of spatial autocorrelation; (iii) in the departments of Amazonas, Vaupés, Guaviare, Guainía, Vichada, the former quartermaster, no registration was carried out between 2000 and 2016; (iv) it is necessary to promote the registration campaigns, education on the industrial property system and an increase in the points of service of the Superintendence of Industry and Commerce, in the departments of Cundinamarca and Santander, since they demonstrated a potential for the records of new creations.
Collections