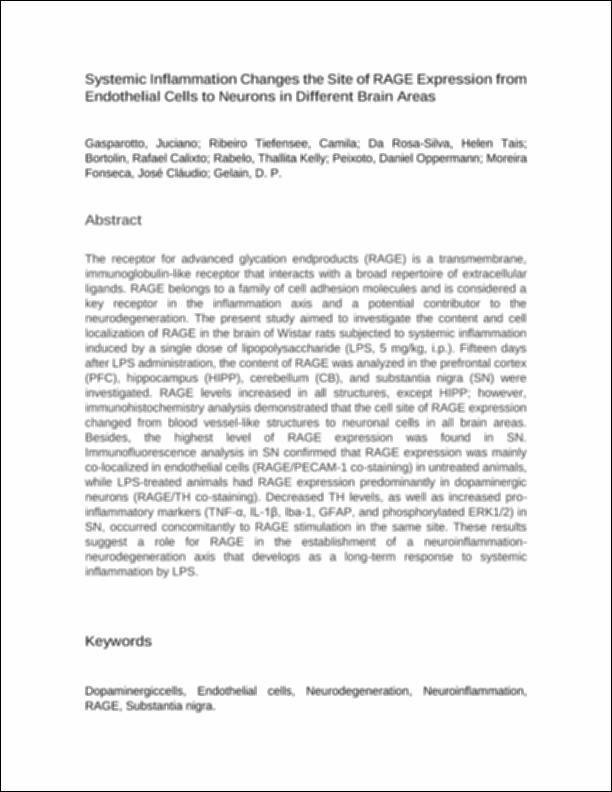 The receptor for advanced glycation endproducts (RAGE) is a transmembrane, immunoglobulin-like receptor that interacts with a broad repertoire of extracellular ligands. RAGE belongs to a family of cell adhesion molecules and is considered a key receptor in the inflammation axis and a potential contributor to the neurodegeneration. The present study aimed to investigate the content and cell localization of RAGE in the brain of Wistar rats subjected to systemic inflammation induced by a single dose of lipopolysaccharide (LPS, 5 mg/kg, i.p.). Fifteen days after LPS administration, the content of RAGE was analyzed in the prefrontal cortex (PFC), hippocampus (HIPP), cerebellum (CB), and substantia nigra (SN) were investigated. RAGE levels increased in all structures, except HIPP; however, immunohistochemistry analysis demonstrated that the cell site of RAGE expression changed from blood vessel-like structures to neuronal cells in all brain areas. Besides, the highest level of RAGE expression was found in SN. Immunofluorescence analysis in SN confirmed that RAGE expression was mainly co-localized in endothelial cells (RAGE/PECAM-1 co-staining) in untreated animals, while LPS-treated animals had RAGE expression predominantly in dopaminergic neurons (RAGE/TH co-staining). Decreased TH levels, as well as increased pro-inflammatory markers (TNF-α, IL-1β, Iba-1, GFAP, and phosphorylated ERK1/2) in SN, occurred concomitantly to RAGE stimulation in the same site. These results suggest a role for RAGE in the establishment of a neuroinflammation-neurodegeneration axis that develops as a long-term response to systemic inflammation by LPS.
Collections