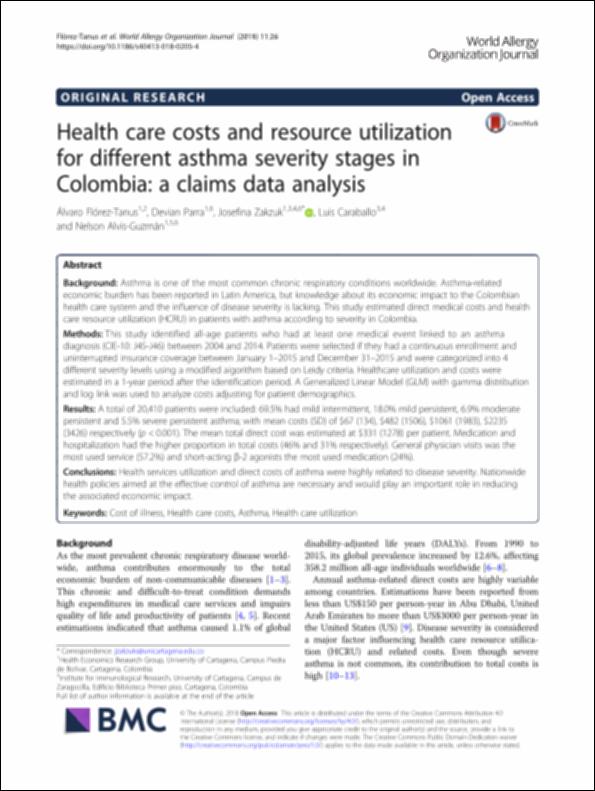 Background: Asthma is one of the most common chronic respiratory conditions worldwide. Asthma-related economic burden has been reported in Latin America, but knowledge about its economic impact to the Colombian health care system and the influence of disease severity is lacking. This study estimated direct medical costs and health care resource utilization (HCRU) in patients with asthma according to severity in Colombia. Methods: This study identified all-age patients who had at least one medical event linked to an asthma diagnosis (CIE-10: J45-J46) between 2004 and 2014. Patients were selected if they had a continuous enrollment and uninterrupted insurance coverage between January 1–2015 and December 31–2015 and were categorized into 4 different severity levels using a modified algorithm based on Leidy criteria. Healthcare utilization and costs were estimated in a 1-year period after the identification period. A Generalized Linear Model (GLM) with gamma distribution and log link was used to analyze costs adjusting for patient demographics. Results: A total of 20,410 patients were included: 69.5% had mild intermittent, 18.0% mild persistent, 6.9% moderate persistent and 5.5% severe persistent asthma; with mean costs (SD) of $67 (134), $482 (1506), $1061 (1983), $2235 (3426) respectively (p < 0.001). The mean total direct cost was estimated at $331 (1278) per patient. Medication and hospitalization had the higher proportion in total costs (46% and 31% respectively). General physician visits was the most used service (57.2%) and short-acting β-2 agonists the most used medication (24%). Conclusions: Health services utilization and direct costs of asthma were highly related to disease severity. Nationwide health policies aimed at the effective control of asthma are necessary and would play an important role in reducing the associated economic impact.
Collections