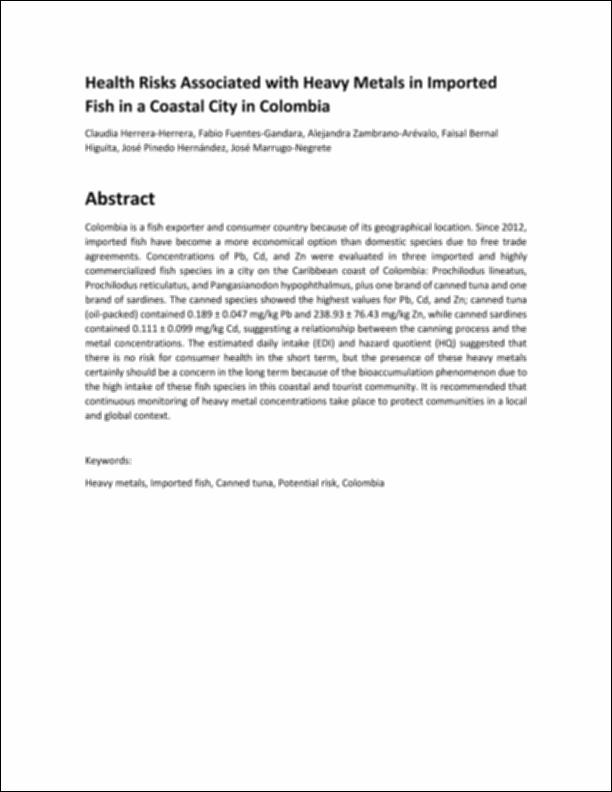 Colombia is a fish exporter and consumer country because of its geographical location. Since 2012, imported fish have become a more economical option than domestic species due to free trade agreements. Concentrations of Pb, Cd, and Zn were evaluated in three imported and highly commercialized fish species in a city on the Caribbean coast of Colombia: Prochilodus lineatus, Prochilodus reticulatus, and Pangasianodon hypophthalmus, plus one brand of canned tuna and one brand of sardines. The canned species showed the highest values for Pb, Cd, and Zn; canned tuna (oil-packed) contained 0.189 ± 0.047 mg/kg Pb and 238.93 ± 76.43 mg/kg Zn, while canned sardines contained 0.111 ± 0.099 mg/kg Cd, suggesting a relationship between the canning process and the metal concentrations. The estimated daily intake (EDI) and hazard quotient (HQ) suggested that there is no risk for consumer health in the short term, but the presence of these heavy metals certainly should be a concern in the long term because of the bioaccumulation phenomenon due to the high intake of these fish species in this coastal and tourist community. It is recommended that continuous monitoring of heavy metal concentrations take place to protect communities in a local and global context.
Collections