Sediment bypassing from the new human-induced lobe to the ancient lobe of the turbo delta (gulf of Urabá, southern caribbean sea) 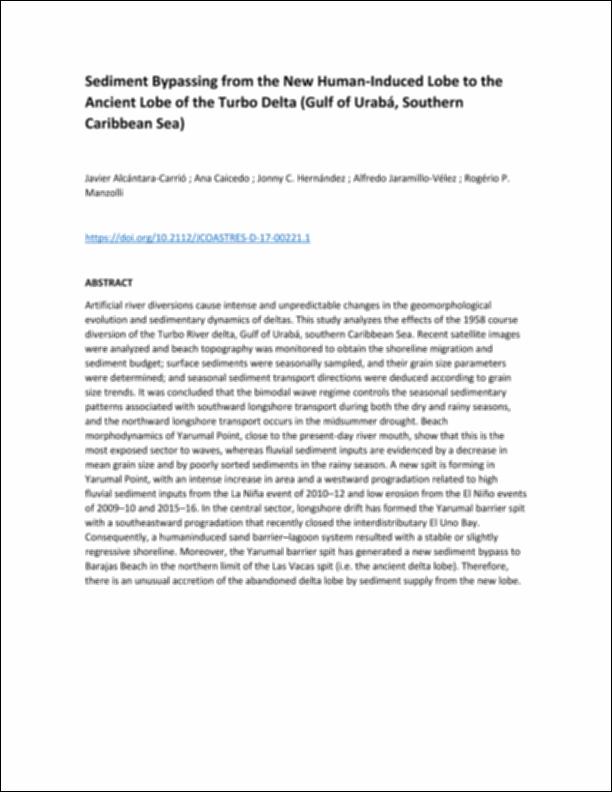 Artificial river diversions cause intense and unpredictable changes in the geomorphological evolution and sedimentary dynamics of deltas. This study analyzes the effects of the 1958 course diversion of the Turbo River delta, Gulf of Urabá, southern Caribbean Sea. Recent satellite images were analyzed and beach topography was monitored to obtain the shoreline migration and sediment budget; surface sediments were seasonally sampled, and their grain size parameters were determined; and seasonal sediment transport directions were deduced according to grain size trends. It was concluded that the bimodal wave regime controls the seasonal sedimentary patterns associated with southward longshore transport during both the dry and rainy seasons, and the northward longshore transport occurs in the midsummer drought. Beach morphodynamics of Yarumal Point, close to the present-day river mouth, show that this is the most exposed sector to waves, whereas fluvial sediment inputs are evidenced by a decrease in mean grain size and by poorly sorted sediments in the rainy season. A new spit is forming in Yarumal Point, with an intense increase in area and a westward progradation related to high fluvial sediment inputs from the La Niña event of 2010–12 and low erosion from the El Niño events of 2009–10 and 2015–16. In the central sector, longshore drift has formed the Yarumal barrier spit with a southeastward progradation that recently closed the interdistributary El Uno Bay. Consequently, a humaninduced sand barrier–lagoon system resulted with a stable or slightly regressive shoreline. Moreover, the Yarumal barrier spit has generated a new sediment bypass to Barajas Beach in the northern limit of the Las Vacas spit (i.e. the ancient delta lobe). Therefore, there is an unusual accretion of the abandoned delta lobe by sediment supply from the new lobe.
Collections