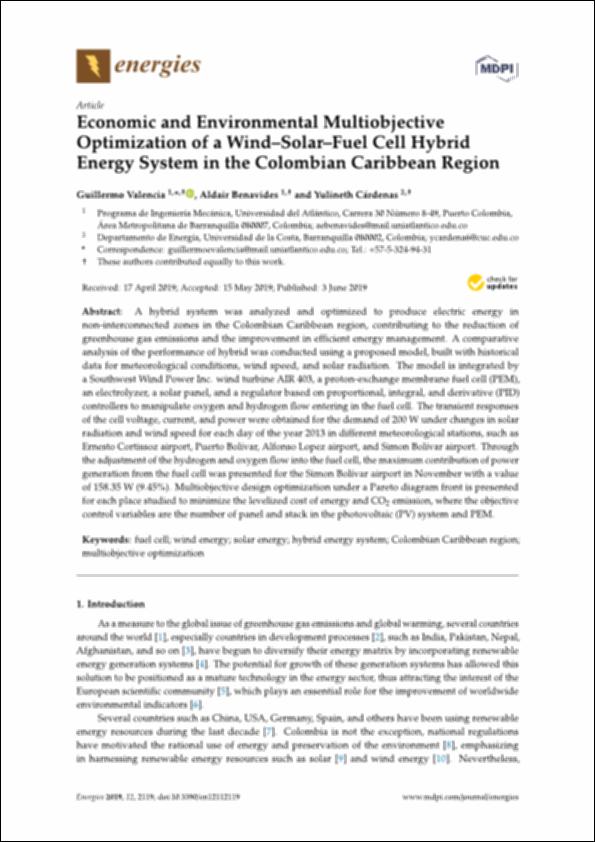 A hybrid system was analyzed and optimized to produce electric energy in non-interconnected zones in the Colombian Caribbean region, contributing to the reduction of greenhouse gas emissions and the improvement in efficient energy management. A comparative analysis of the performance of hybrid was conducted using a proposed model, built with historical data for meteorological conditions, wind speed, and solar radiation. The model is integrated by a Southwest Wind Power Inc. wind turbine AIR 403, a proton-exchange membrane fuel cell (PEM), an electrolyzer, a solar panel, and a regulator based on proportional, integral, and derivative (PID) controllers to manipulate oxygen and hydrogen flow entering in the fuel cell. The transient responses of the cell voltage, current, and power were obtained for the demand of 200 W under changes in solar radiation and wind speed for each day of the year 2013 in different meteorological stations, such as Ernesto Cortissoz airport, Puerto Bolívar, Alfonso Lopez airport, and Simon Bolívar airport. Through the adjustment of the hydrogen and oxygen flow into the fuel cell, the maximum contribution of power generation from the fuel cell was presented for the Simon Bolívar airport in November with a value of 158.35 W (9.45%). Multiobjective design optimization under a Pareto diagram front is presented for each place studied to minimize the levelized cost of energy and CO2 emission, where the objective control variables are the number of panel and stack in the photovoltaic (PV) system and PEM.
Collections