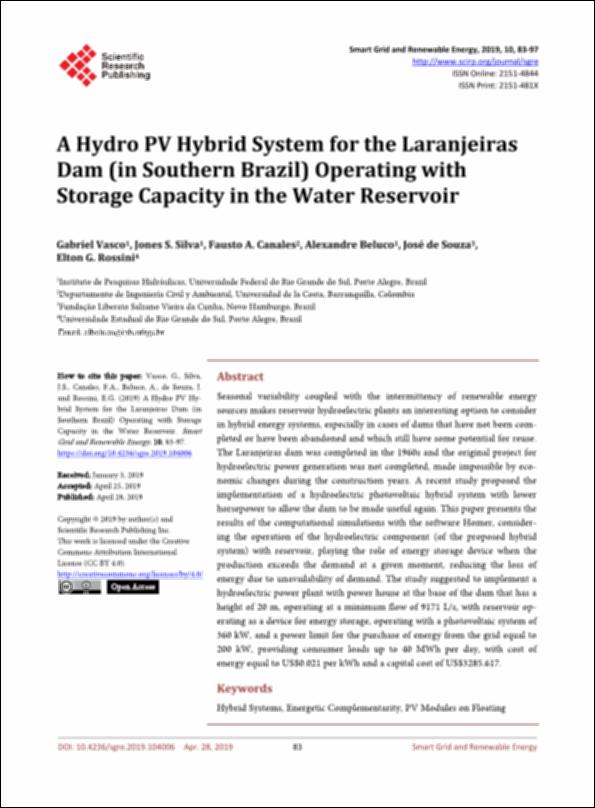 A hydro pv hybrid system for the laranjeiras dam (in southern brazil) operating with storage capacity in the water reservoir.pdf (3.866Mb)
Author

Seasonal variability coupled with the intermittency of renewable energy sources makes reservoir hydroelectric plants an interesting option to consider in hybrid energy systems, especially in cases of dams that have not been completed or have been abandoned and which still have some potential for reuse. The Laranjeiras dam was completed in the 1960s and the original project for hydroelectric power generation was not completed, made impossible by economic changes during the construction years. A recent study proposed the implementation of a hydroelectric photovoltaic hybrid system with lower horsepower to allow the dam to be made useful again. This paper presents the results of the computational simulations with the software Homer, considering the operation of the hydroelectric component (of the proposed hybrid system) with reservoir, playing the role of energy storage device when the production exceeds the demand at a given moment, reducing the loss of energy due to unavailability of demand. The study suggested to implement a hydroelectric power plant with power house at the base of the dam that has a height of 20 m, operating at a minimum flow of 9171 L/s, with reservoir operating as a device for energy storage, operating with a photovoltaic system of 360 kW, and a power limit for the purchase of energy from the grid equal to 200 kW, providing consumer loads up to 40 MWh per day, with cost of energy equal to US$0.021 per kWh and a capital cost of US$3285.617.
Collections