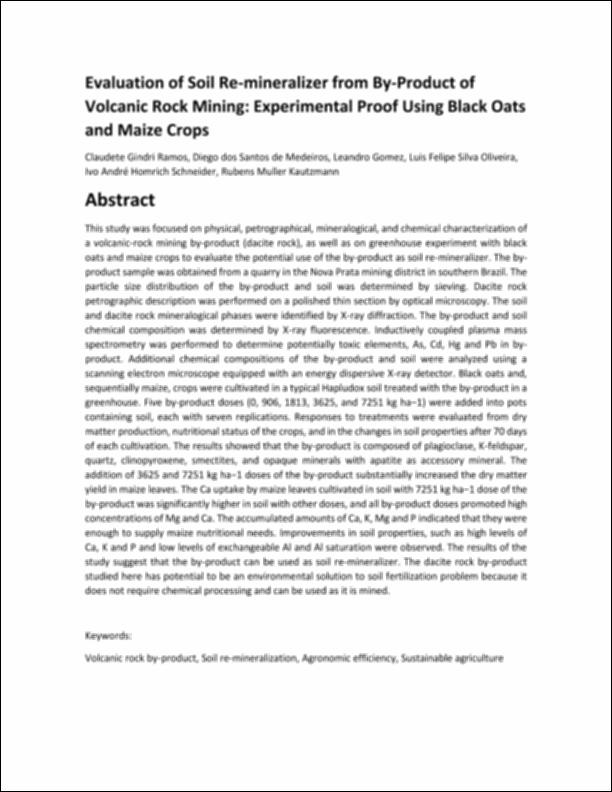 This study was focused on physical, petrographical, mineralogical, and chemical characterization of a volcanic-rock mining by-product (dacite rock), as well as on greenhouse experiment with black oats and maize crops to evaluate the potential use of the by-product as soil re-mineralizer. The by-product sample was obtained from a quarry in the Nova Prata mining district in southern Brazil. The particle size distribution of the by-product and soil was determined by sieving. Dacite rock petrographic description was performed on a polished thin section by optical microscopy. The soil and dacite rock mineralogical phases were identified by X-ray diffraction. The by-product and soil chemical composition was determined by X-ray fluorescence. Inductively coupled plasma mass spectrometry was performed to determine potentially toxic elements, As, Cd, Hg and Pb in by-product. Additional chemical compositions of the by-product and soil were analyzed using a scanning electron microscope equipped with an energy dispersive X-ray detector. Black oats and, sequentially maize, crops were cultivated in a typical Hapludox soil treated with the by-product in a greenhouse. Five by-product doses (0, 906, 1813, 3625, and 7251 kg ha−1) were added into pots containing soil, each with seven replications. Responses to treatments were evaluated from dry matter production, nutritional status of the crops, and in the changes in soil properties after 70 days of each cultivation. The results showed that the by-product is composed of plagioclase, K-feldspar, quartz, clinopyroxene, smectites, and opaque minerals with apatite as accessory mineral. The addition of 3625 and 7251 kg ha−1 doses of the by-product substantially increased the dry matter yield in maize leaves. The Ca uptake by maize leaves cultivated in soil with 7251 kg ha−1 dose of the by-product was significantly higher in soil with other doses, and all by-product doses promoted high concentrations of Mg and Ca. The accumulated amounts of Ca, K, Mg and P indicated that they were enough to supply maize nutritional needs. Improvements in soil properties, such as high levels of Ca, K and P and low levels of exchangeable Al and Al saturation were observed. The results of the study suggest that the by-product can be used as soil re-mineralizer. The dacite rock by-product studied here has potential to be an environmental solution to soil fertilization problem because it does not require chemical processing and can be used as it is mined.
Collections