Educational inequality trends in mortality due to pneumonia in Colombia, 1998-2015 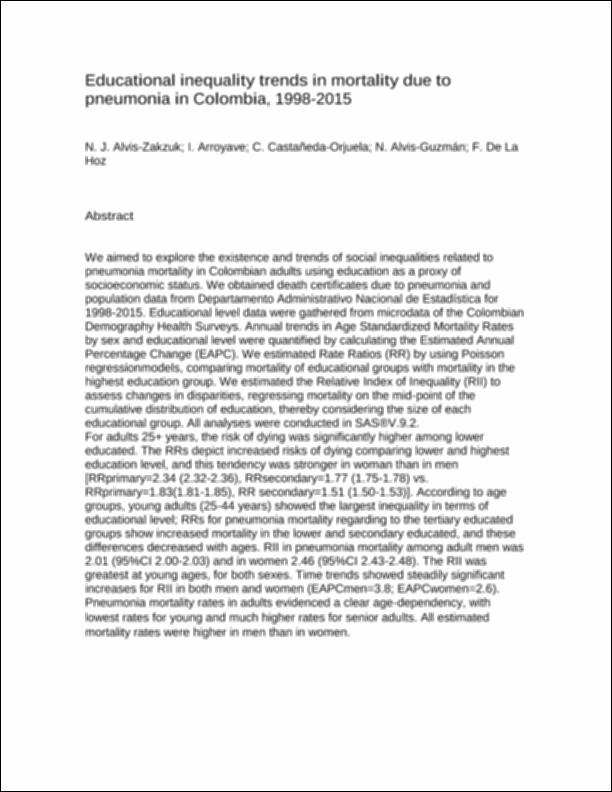 Educational inequality trends in mortality due to pneumonia in Colombia.pdf (7.471Kb)
Author

We aimed to explore the existence and trends of social inequalities related to pneumonia mortality in Colombian adults using education as a proxy of socioeconomic status. We obtained death certificates due to pneumonia and population data from Departamento Administrativo Nacional de Estadística for 1998-2015. Educational level data were gathered from microdata of the Colombian Demography Health Surveys. Annual trends in Age Standardized Mortality Rates by sex and educational level were quantified by calculating the Estimated Annual Percentage Change (EAPC). We estimated Rate Ratios (RR) by using Poisson regressionmodels, comparing mortality of educational groups with mortality in the highest education group. We estimated the Relative Index of Inequality (RII) to assess changes in disparities, regressing mortality on the mid-point of the cumulative distribution of education, thereby considering the size of each educational group. All analyses were conducted in SAS®V.9.2. For adults 25+ years, the risk of dying was significantly higher among lower educated. The RRs depict increased risks of dying comparing lower and highest education level, and this tendency was stronger in woman than in men [RRprimary=2.34 (2.32-2.36), RRsecondary=1.77 (1.75-1.78) vs. RRprimary=1.83(1.81-1.85), RR secondary=1.51 (1.50-1.53)]. According to age groups, young adults (25-44 years) showed the largest inequality in terms of educational level; RRs for pneumonia mortality regarding to the tertiary educated groups show increased mortality in the lower and secondary educated, and these differences decreased with ages. RII in pneumonia mortality among adult men was 2.01 (95%CI 2.00-2.03) and in women 2.46 (95%CI 2.43-2.48). The RII was greatest at young ages, for both sexes. Time trends showed steadily significant increases for RII in both men and women (EAPCmen=3.8; EAPCwomen=2.6). Pneumonia mortality rates in adults evidenced a clear age-dependency, with lowest rates for young and much higher rates for senior adults. All estimated mortality rates were higher in men than in women.
Collections