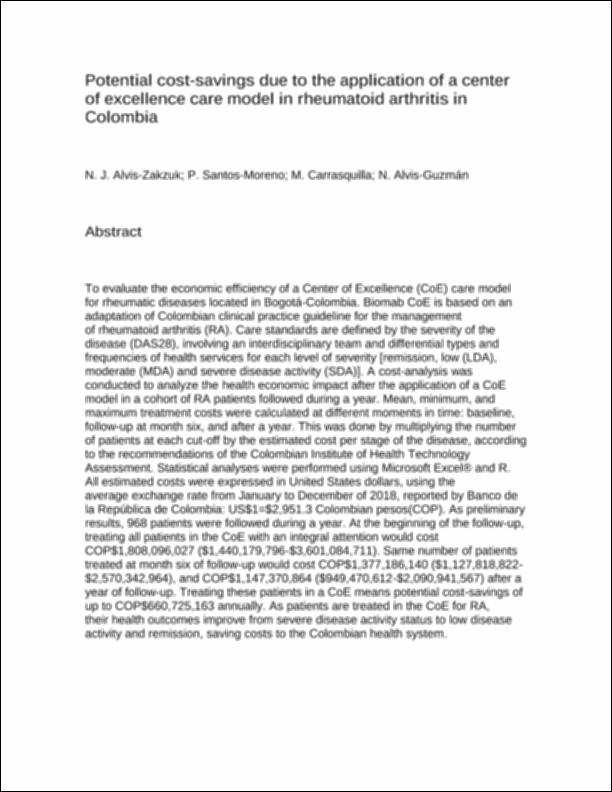 Potential cost-savings due to the application of a center of excellence care model in rheumatoid arthritis in Colombia.pdf (13.01Kb)
Author

To evaluate the economic efficiency of a Center of Excellence (CoE) care model for rheumatic diseases located in Bogotá-Colombia. Biomab CoE is based on an adaptation of Colombian clinical practice guideline for the management of rheumatoid arthritis (RA). Care standards are defined by the severity of the disease (DAS28), involving an interdisciplinary team and differential types and frequencies of health services for each level of severity [remission, low (LDA), moderate (MDA) and severe disease activity (SDA)]. A cost-analysis was conducted to analyze the health economic impact after the application of a CoE model in a cohort of RA patients followed during a year. Mean, minimum, and maximum treatment costs were calculated at different moments in time: baseline, follow-up at month six, and after a year. This was done by multiplying the number of patients at each cut-off by the estimated cost per stage of the disease, according to the recommendations of the Colombian Institute of Health Technology Assessment. Statistical analyses were performed using Microsoft Excel® and R. All estimated costs were expressed in United States dollars, using the average exchange rate from January to December of 2018, reported by Banco de la República de Colombia: US$1=$2,951.3 Colombian pesos(COP). As preliminary results, 968 patients were followed during a year. At the beginning of the follow-up, treating all patients in the CoE with an integral attention would cost COP$1,808,096,027 ($1,440,179,796-$3,601,084,711). Same number of patients treated at month six of follow-up would cost COP$1,377,186,140 ($1,127,818,822-$2,570,342,964), and COP$1,147,370,864 ($949,470,612-$2,090,941,567) after a year of follow-up. Treating these patients in a CoE means potential cost-savings of up to COP$660,725,163 annually. As patients are treated in the CoE for RA, their health outcomes improve from severe disease activity status to low disease activity and remission, saving costs to the Colombian health system.
Collections