Costs and disease activity in patients with rheumatoid arthritis treated with biologic dmards: findings in a real-life setting 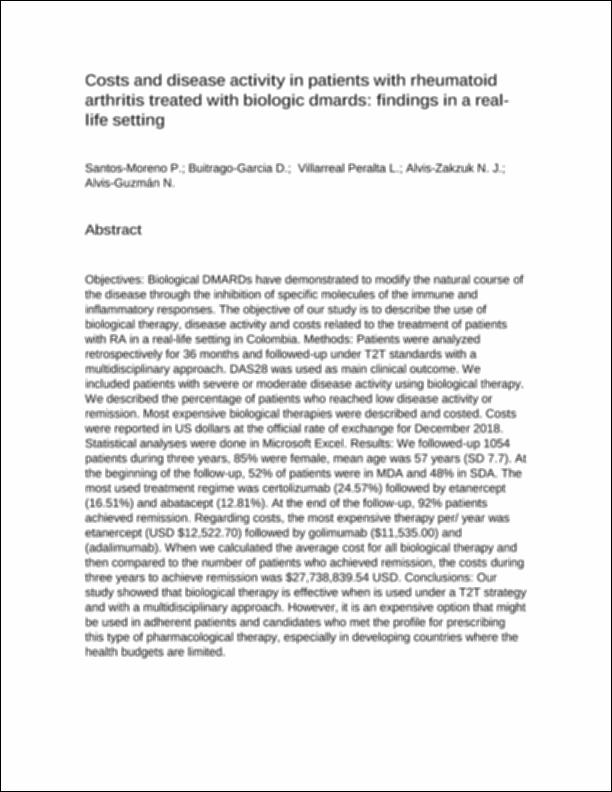 Objectives: Biological DMARDs have demonstrated to modify the natural course of the disease through the inhibition of specific molecules of the immune and inflammatory responses. The objective of our study is to describe the use of biological therapy, disease activity and costs related to the treatment of patients with RA in a real-life setting in Colombia. Methods: Patients were analyzed retrospectively for 36 months and followed-up under T2T standards with a multidisciplinary approach. DAS28 was used as main clinical outcome. We included patients with severe or moderate disease activity using biological therapy. We described the percentage of patients who reached low disease activity or remission. Most expensive biological therapies were described and costed. Costs were reported in US dollars at the official rate of exchange for December 2018. Statistical analyses were done in Microsoft Excel. Results: We followed-up 1054 patients during three years, 85% were female, mean age was 57 years (SD 7.7). At the beginning of the follow-up, 52% of patients were in MDA and 48% in SDA. The most used treatment regime was certolizumab (24.57%) followed by etanercept (16.51%) and abatacept (12.81%). At the end of the follow-up, 92% patients achieved remission. Regarding costs, the most expensive therapy per/ year was etanercept (USD $12,522.70) followed by golimumab ($11,535.00) and (adalimumab). When we calculated the average cost for all biological therapy and then compared to the number of patients who achieved remission, the costs during three years to achieve remission was $27,738,839.54 USD. Conclusions: Our study showed that biological therapy is effective when is used under a T2T strategy and with a multidisciplinary approach. However, it is an expensive option that might be used in adherent patients and candidates who met the profile for prescribing this type of pharmacological therapy, especially in developing countries where the health budgets are limited.
Collections