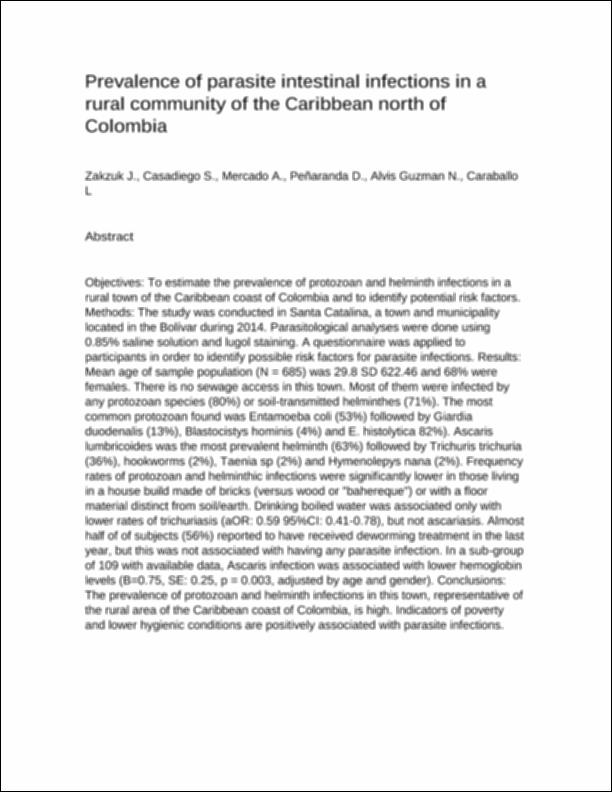 Prevalence of parasite intestinal infections in a rural community of the Caribbean north of Colombia.pdf (6.930Kb)
Author

Objectives: To estimate the prevalence of protozoan and helminth infections in a rural town of the Caribbean coast of Colombia and to identify potential risk factors. Methods: The study was conducted in Santa Catalina, a town and municipality located in the Bolívar during 2014. Parasitological analyses were done using 0.85% saline solution and lugol staining. A questionnaire was applied to participants in order to identify possible risk factors for parasite infections. Results: Mean age of sample population (N = 685) was 29.8 SD 622.46 and 68% were females. There is no sewage access in this town. Most of them were infected by any protozoan species (80%) or soil-transmitted helminthes (71%). The most common protozoan found was Entamoeba coli (53%) followed by Giardia duodenalis (13%), Blastocistys hominis (4%) and E. histolytica 82%). Ascaris lumbricoides was the most prevalent helminth (63%) followed by Trichuris trichuria (36%), hookworms (2%), Taenia sp (2%) and Hymenolepys nana (2%). Frequency rates of protozoan and helminthic infections were significantly lower in those living in a house build made of bricks (versus wood or "bahereque") or with a floor material distinct from soil/earth. Drinking boiled water was associated only with lower rates of trichuriasis (aOR: 0.59 95%CI: 0.41-0.78), but not ascariasis. Almost half of of subjects (56%) reported to have received deworming treatment in the last year, but this was not associated with having any parasite infection. In a sub-group of 109 with available data, Ascaris infection was associated with lower hemoglobin levels (B=0.75, SE: 0.25, p = 0.003, adjusted by age and gender). Conclusions: The prevalence of protozoan and helminth infections in this town, representative of the rural area of the Caribbean coast of Colombia, is high. Indicators of poverty and lower hygienic conditions are positively associated with parasite infections.
Collections