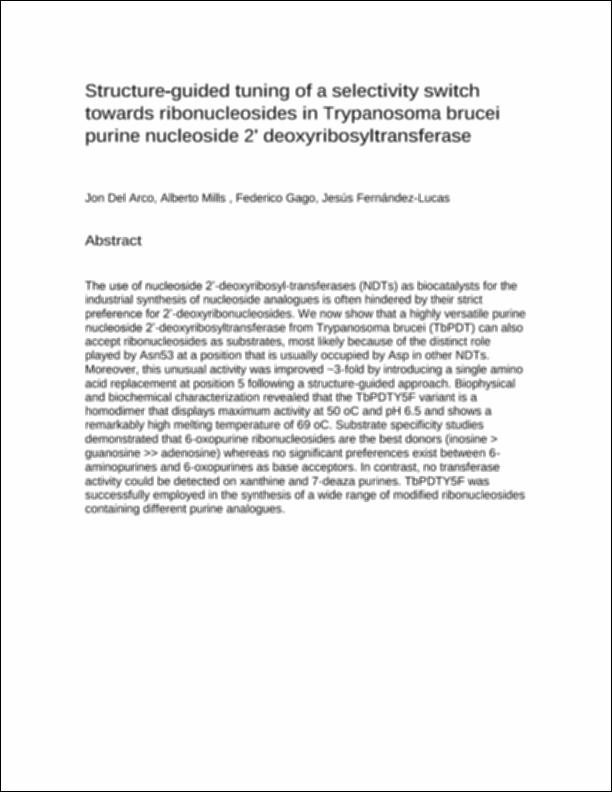 The use of nucleoside 2’‐deoxyribosyl‐transferases (NDTs) as biocatalysts for the industrial synthesis of nucleoside analogues is often hindered by their strict preference for 2’‐deoxyribonucleosides. We now show that a highly versatile purine nucleoside 2’‐deoxyribosyltransferase from Trypanosoma brucei (TbPDT) can also accept ribonucleosides as substrates, most likely because of the distinct role played by Asn53 at a position that is usually occupied by Asp in other NDTs. Moreover, this unusual activity was improved ~3‐fold by introducing a single amino acid replacement at position 5 following a structure‐guided approach. Biophysical and biochemical characterization revealed that the TbPDTY5F variant is a homodimer that displays maximum activity at 50 oC and pH 6.5 and shows a remarkably high melting temperature of 69 oC. Substrate specificity studies demonstrated that 6‐oxopurine ribonucleosides are the best donors (inosine > guanosine >> adenosine) whereas no significant preferences exist between 6‐aminopurines and 6‐oxopurines as base acceptors. In contrast, no transferase activity could be detected on xanthine and 7‐deaza purines. TbPDTY5F was successfully employed in the synthesis of a wide range of modified ribonucleosides containing different purine analogues.
Collections