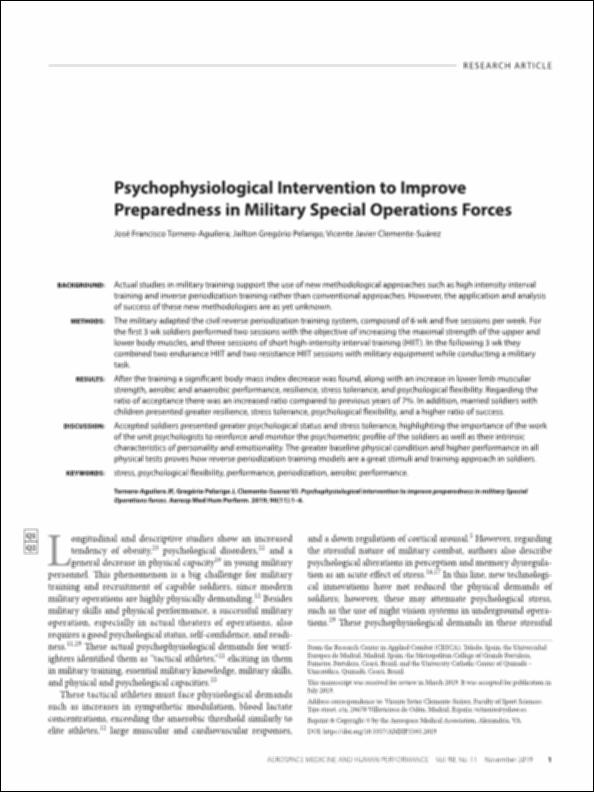 Actual studies in military training support the use of new methodological approaches such as high intensity interval training and inverse periodization training rather than conventional approaches. However, the application and analysis of success of these new methodologies are as yet unknown. The military adapted the civil reverse periodization training system, composed of 6 wk and five sessions per week. For the first 3 wk soldiers performed two sessions with the objective of increasing the maximal strength of the upper and lower body muscles, and three sessions of short high-intensity interval training (HIIT). In the following 3 wk they combined two endurance HIIT and two resistance HIIT sessions with military equipment while conducting a military task. After the training a significant body mass index decrease was found, along with an increase in lower limb muscular strength, aerobic and anaerobic performance, resilience, stress tolerance, and psychological flexibility. Regarding the ratio of acceptance there was an increased ratio compared to previous years of 7%. In addition, married soldiers with children presented greater resilience, stress tolerance, psychological flexibility, and a higher ratio of success. Accepted soldiers presented greater psychological status and stress tolerance, highlighting the importance of the work of the unit psychologists to reinforce and monitor the psychometric profile of the soldiers as well as their intrinsic characteristics of personality and emotionality. The greater baseline physical condition and higher performance in all physical tests proves how reverse periodization training models are a great stimuli and training approach in soldiers. Stress, psychological flexibility, performance, periodization, aerobic performance.
Collections