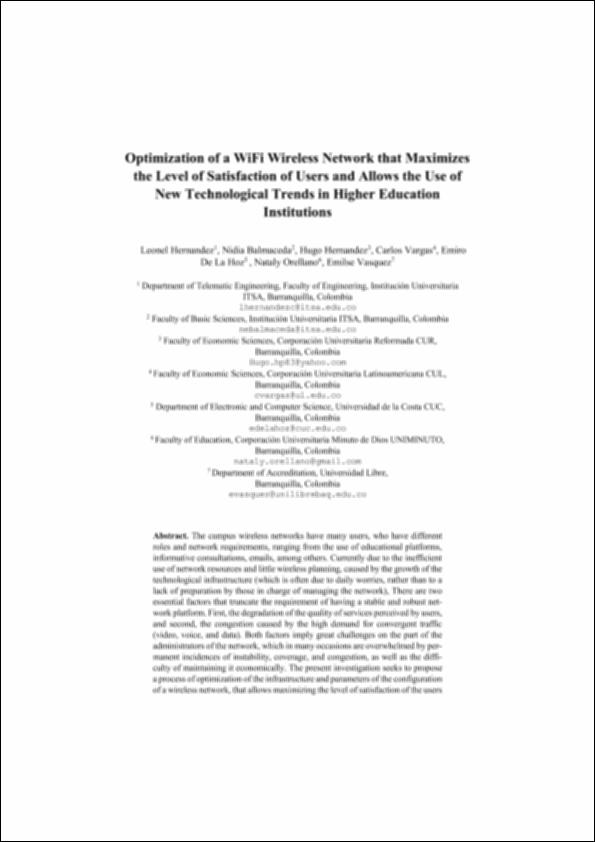 Optimization of a WiFi Wireless Network that Maximizes the Level of Satisfaction of Users and Allows the Use of New Technological Trends in Higher Education Institutions.pdf (902.5Kb)
Author

The campus wireless networks have many users, who have different roles and network requirements, ranging from the use of educational platforms, informative consultations, emails, among others. Currently due to the inefficient use of network resources and little wireless planning, caused by the growth of the technological infrastructure (which is often due to daily worries, rather than to a lack of preparation by those in charge of managing the network), There are two essential factors that truncate the requirement of having a stable and robust net-work platform. First, the degradation of the quality of services perceived by users, and second, the congestion caused by the high demand for convergent traffic (video, voice, and data). Both factors imply great challenges on the part of the administrators of the network, which in many occasions are overwhelmed by per-manent incidences of instability, coverage, and congestion, as well as the diffi-culty of maintaining it economically. The present investigation seeks to propose a process of optimization of the infrastructure and parameters of the configuration of a wireless network, that allows maximizing the level of satisfaction of the users in Higher Education Institutions. In the first place, it is expected to determine an adequate methodology to estimate the level of satisfaction of the users (defining a mathematical criterion or algorithm based on the study variables [1], character-ize the environment in which the project will be developed, making a complete study of the wireless conditions and implement optimization strategies with soft-ware-defined networks (SDN). SDN is a concept in computer networks that al-lows network management to be carried out efficiently and flexibly, separating the control plane from the data plane into network devices. SDN architecture consists of an infrastructure layer which is a collection of network devices con-nected to the SDN Controller using protocol (OpenFlow) as a protocol [2]. Also, SDN will study traffic patterns on the network as a basis for optimizing network device usage [3]. The phases of the research will be carried out following the life cycle defined by the Cisco PPDIOO methodology (Prepare, Plan, Design, Imple-ment, Operate, Optimize) [4].
Collections