Theoretical study of the adsorption process of antimalarial drugs into acrylamide-base hydrogel model using dft methods: the first approach to the rational design of a controlled drug delivery system 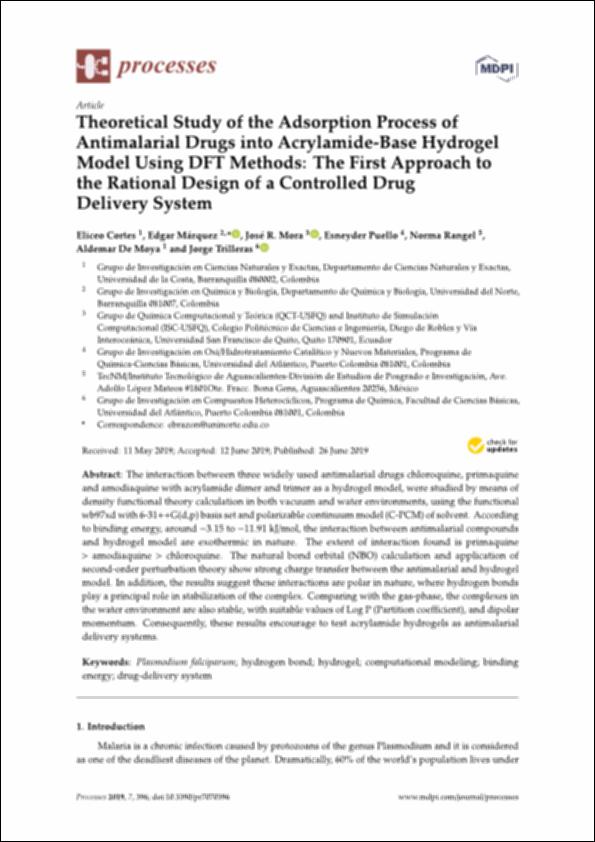 The interaction between three widely used antimalarial drugs chloroquine, primaquine and amodiaquine with acrylamide dimer and trimer as a hydrogel model, were studied by means of density functional theory calculation in both vacuum and water environments, using the functional wb97xd with 6-31++G(d,p) basis set and polarizable continuum model (C-PCM) of solvent. According to binding energy, around −3.15 to −11.91 kJ/mol, the interaction between antimalarial compounds and hydrogel model are exothermic in nature. The extent of interaction found is primaquine > amodiaquine > chloroquine. The natural bond orbital (NBO) calculation and application of second-order perturbation theory show strong charge transfer between the antimalarial and hydrogel model. In addition, the results suggest these interactions are polar in nature, where hydrogen bonds play a principal role in stabilization of the complex. Comparing with the gas-phase, the complexes in the water environment are also stable, with suitable values of Log P (Partition coefficient), and dipolar momentum. Consequently, these results encourage to test acrylamide hydrogels as antimalarial delivery systems.
Collections