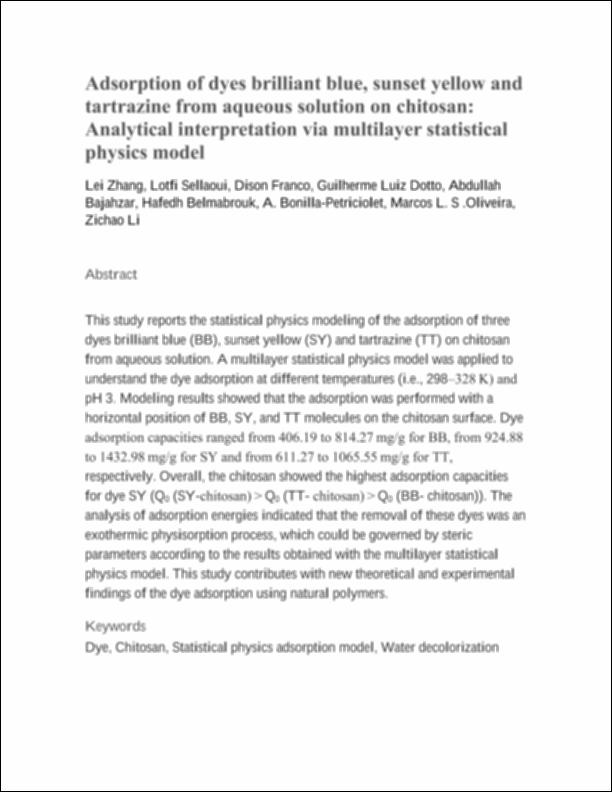 This study reports the statistical physics modeling of the adsorption of three dyes brilliant blue (BB), sunset yellow (SY) and tartrazine (TT) on chitosan from aqueous solution. A multilayer statistical physics model was applied to understand the dye adsorption at different temperatures (i.e., 298–328 K) and pH 3. Modeling results showed that the adsorption was performed with a horizontal position of BB, SY, and TT molecules on the chitosan surface. Dye adsorption capacities ranged from 406.19 to 814.27 mg/g for BB, from 924.88 to 1432.98 mg/g for SY and from 611.27 to 1065.55 mg/g for TT, respectively. Overall, the chitosan showed the highest adsorption capacities for dye SY (Q0 (SY-chitosan) > Q0 (TT- chitosan) > Q0 (BB- chitosan)). The analysis of adsorption energies indicated that the removal of these dyes was an exothermic physisorption process, which could be governed by steric parameters according to the results obtained with the multilayer statistical physics model. This study contributes with new theoretical and experimental findings of the dye adsorption using natural polymers.
Collections