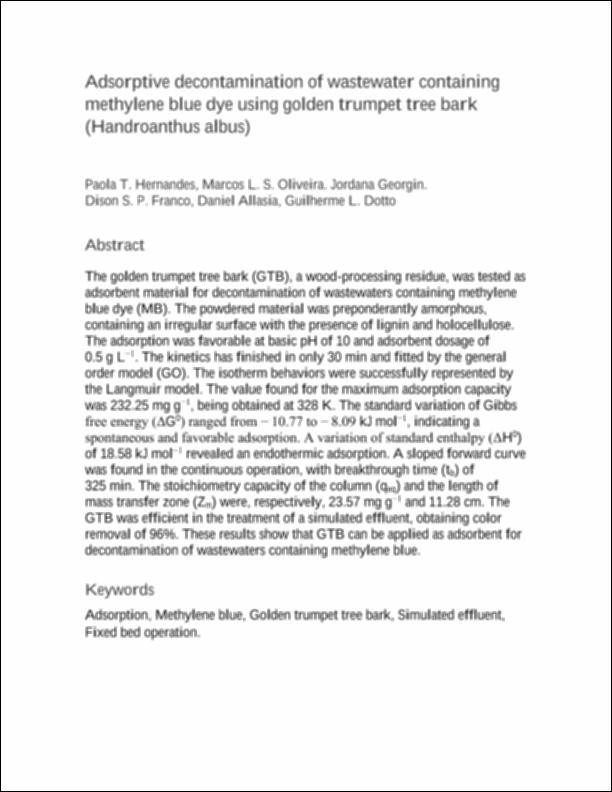 The golden trumpet tree bark (GTB), a wood-processing residue, was tested as adsorbent material for decontamination of wastewaters containing methylene blue dye (MB). The powdered material was preponderantly amorphous, containing an irregular surface with the presence of lignin and holocellulose. The adsorption was favorable at basic pH of 10 and adsorbent dosage of 0.5 g L−1. The kinetics has finished in only 30 min and fitted by the general order model (GO). The isotherm behaviors were successfully represented by the Langmuir model. The value found for the maximum adsorption capacity was 232.25 mg g−1, being obtained at 328 K. The standard variation of Gibbs free energy (ΔG0) ranged from − 10.77 to − 8.09 kJ mol−1, indicating a spontaneous and favorable adsorption. A variation of standard enthalpy (ΔH0) of 18.58 kJ mol−1 revealed an endothermic adsorption. A sloped forward curve was found in the continuous operation, with breakthrough time (tb) of 325 min. The stoichiometry capacity of the column (qeq) and the length of mass transfer zone (Zm) were, respectively, 23.57 mg g−1 and 11.28 cm. The GTB was efficient in the treatment of a simulated effluent, obtaining color removal of 96%. These results show that GTB can be applied as adsorbent for decontamination of wastewaters containing methylene blue.
Collections