Teleagro: iot applications for the georeferencing and detection of zeal in cattle 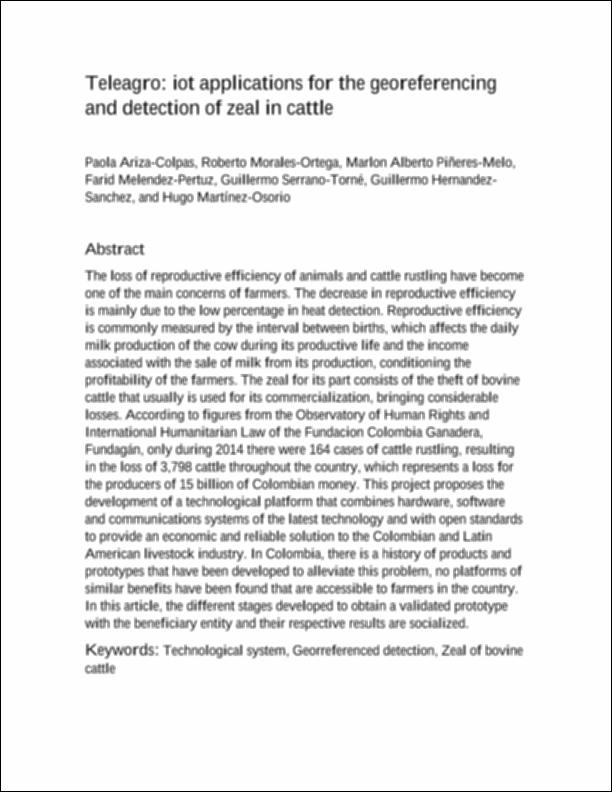 Teleagro iot applications for the georeferencing and detection of zeal in cattle.pdf (10.11Kb)
Author

The loss of reproductive efficiency of animals and cattle rustling have become one of the main concerns of farmers. The decrease in reproductive efficiency is mainly due to the low percentage in heat detection. Reproductive efficiency is commonly measured by the interval between births, which affects the daily milk production of the cow during its productive life and the income associated with the sale of milk from its production, conditioning the profitability of the farmers. The zeal for its part consists of the theft of bovine cattle that usually is used for its commercialization, bringing considerable losses. According to figures from the Observatory of Human Rights and International Humanitarian Law of the Fundacion Colombia Ganadera, Fundagán, only during 2014 there were 164 cases of cattle rustling, resulting in the loss of 3,798 cattle throughout the country, which represents a loss for the producers of 15 billion of Colombian money. This project proposes the development of a technological platform that combines hardware, software and communications systems of the latest technology and with open standards to provide an economic and reliable solution to the Colombian and Latin American livestock industry. In Colombia, there is a history of products and prototypes that have been developed to alleviate this problem, no platforms of similar benefits have been found that are accessible to farmers in the country. In this article, the different stages developed to obtain a validated prototype with the beneficiary entity and their respective results are socialized.
Collections