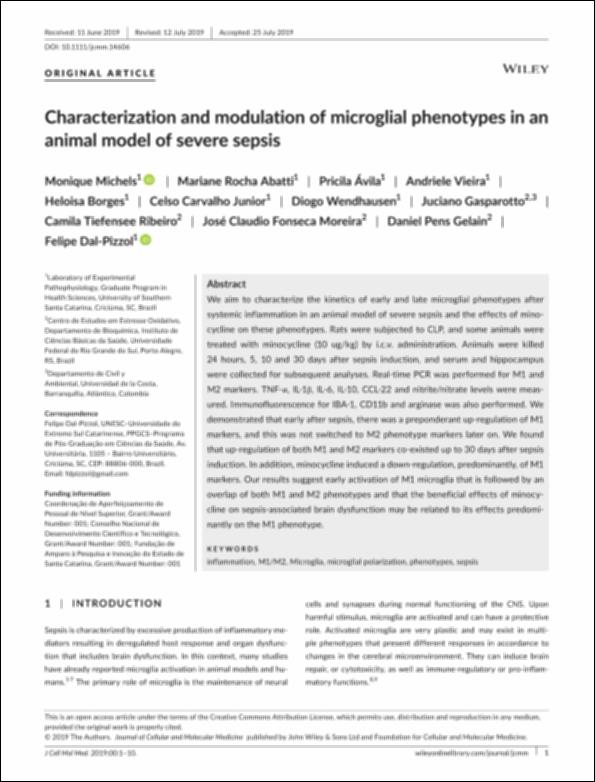 Characterization and modulation of microglial phenotypes in an animal model of severe sepsis.pdf (1.485Mb)
Author

We aim to characterize the kinetics of early and late microglial phenotypes after systemic inflammation in an animal model of severe sepsis and the effects of minocycline on these phenotypes. Rats were subjected to CLP, and some animals were treated with minocycline (10 ug/kg) by i.c.v. administration. Animals were killed 24 hours, 5, 10 and 30 days after sepsis induction, and serum and hippocampus were collected for subsequent analyses. Real‐time PCR was performed for M1 and M2 markers. TNF‐α, IL‐1β, IL‐6, IL‐10, CCL‐22 and nitrite/nitrate levels were measured. Immunofluorescence for IBA‐1, CD11b and arginase was also performed. We demonstrated that early after sepsis, there was a preponderant up‐regulation of M1 markers, and this was not switched to M2 phenotype markers later on. We found that up‐regulation of both M1 and M2 markers co‐existed up to 30 days after sepsis induction. In addition, minocycline induced a down‐regulation, predominantly, of M1 markers. Our results suggest early activation of M1 microglia that is followed by an overlap of both M1 and M2 phenotypes and that the beneficial effects of minocycline on sepsis‐associated brain dysfunction may be related to its effects predominantly on the M1 phenotype.
Collections