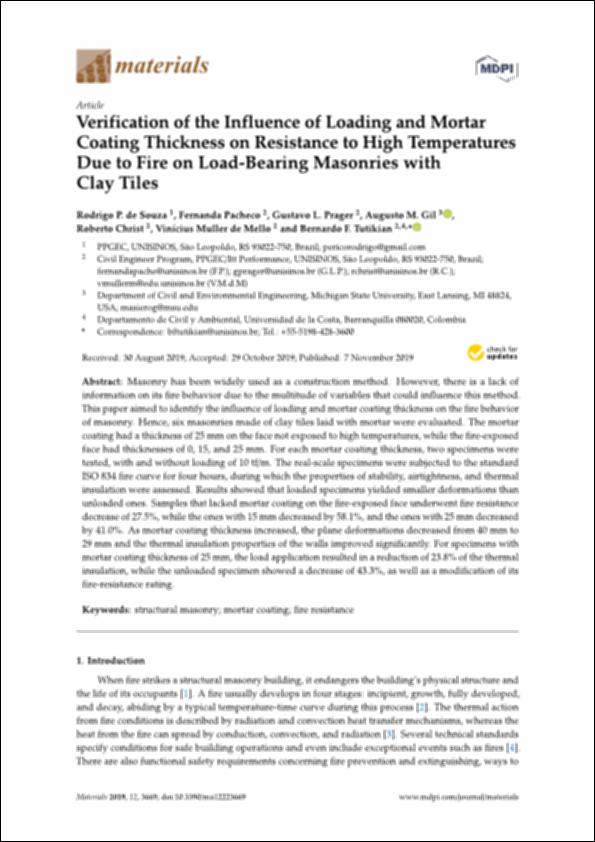 Verification of the influence of loading and mortar coating thickness on resistance to high temperatures due to fire on load-bearing masonries with clay tiles.pdf (8.627Mb)
Author

Masonry has been widely used as a construction method. However, there is a lack of information on its ﬁre behavior due to the multitude of variables that could inﬂuence this method. Thispaperaimedtoidentifytheinﬂuenceofloadingandmortarcoatingthicknessontheﬁrebehavior of masonry. Hence, six masonries made of clay tiles laid with mortar were evaluated. The mortar coatinghadathicknessof25mmonthefacenotexposedtohightemperatures,whiletheﬁre-exposed face had thicknesses of 0, 15, and 25 mm. For each mortar coating thickness, two specimens were tested, with and without loading of 10 tf/m. The real-scale specimens were subjected to the standard ISO 834 ﬁre curve for four hours, during which the properties of stability, airtightness, and thermal insulation were assessed. Results showed that loaded specimens yielded smaller deformations than unloadedones. Samplesthatlackedmortarcoatingontheﬁre-exposedfaceunderwentﬁreresistance decreaseof27.5%,whiletheoneswith15mmdecreasedby58.1%,andtheoneswith25mmdecreased by 41.0%. As mortar coating thickness increased, the plane deformations decreased from 40 mm to 29 mm and the thermal insulation properties of the walls improved signiﬁcantly. For specimens with mortarcoatingthicknessof25mm,theloadapplicationresultedinareductionof23.8%ofthethermal insulation, while the unloaded specimen showed a decrease of 43.3%, as well as a modiﬁcation of its ﬁre-resistance rating.
Collections