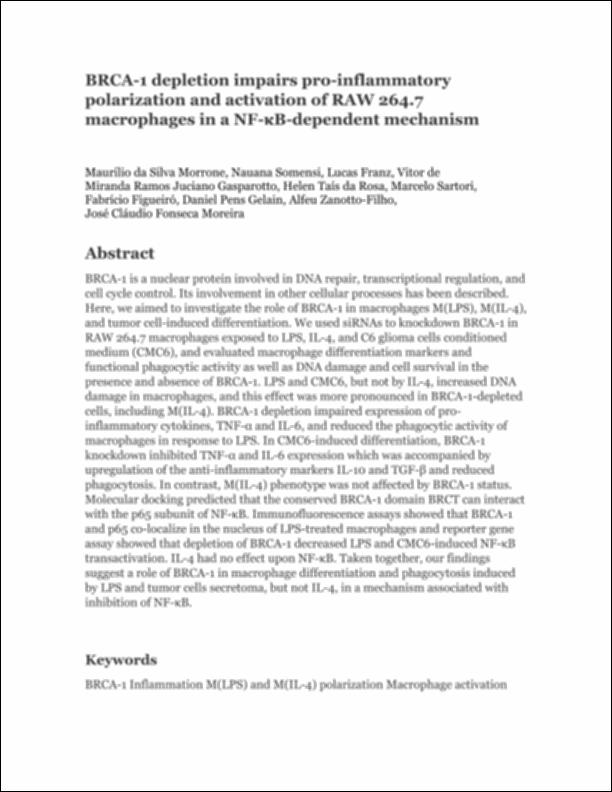 BRCA-1 is a nuclear protein involved in DNA repair, transcriptional regulation, and cell cycle control. Its involvement in other cellular processes has been described. Here, we aimed to investigate the role of BRCA-1 in macrophages M(LPS), M(IL-4), and tumor cell-induced differentiation. We used siRNAs to knockdown BRCA-1 in RAW 264.7 macrophages exposed to LPS, IL-4, and C6 glioma cells conditioned medium (CMC6), and evaluated macrophage differentiation markers and functional phagocytic activity as well as DNA damage and cell survival in the presence and absence of BRCA-1. LPS and CMC6, but not by IL-4, increased DNA damage in macrophages, and this effect was more pronounced in BRCA-1-depleted cells, including M(IL-4). BRCA-1 depletion impaired expression of pro-inflammatory cytokines, TNF-α and IL-6, and reduced the phagocytic activity of macrophages in response to LPS. In CMC6-induced differentiation, BRCA-1 knockdown inhibited TNF-α and IL-6 expression which was accompanied by upregulation of the anti-inflammatory markers IL-10 and TGF-β and reduced phagocytosis. In contrast, M(IL-4) phenotype was not affected by BRCA-1 status. Molecular docking predicted that the conserved BRCA-1 domain BRCT can interact with the p65 subunit of NF-κB. Immunofluorescence assays showed that BRCA-1 and p65 co-localize in the nucleus of LPS-treated macrophages and reporter gene assay showed that depletion of BRCA-1 decreased LPS and CMC6-induced NF-κB transactivation. IL-4 had no effect upon NF-κB. Taken together, our findings suggest a role of BRCA-1 in macrophage differentiation and phagocytosis induced by LPS and tumor cells secretoma, but not IL-4, in a mechanism associated with inhibition of NF-κB.
Collections