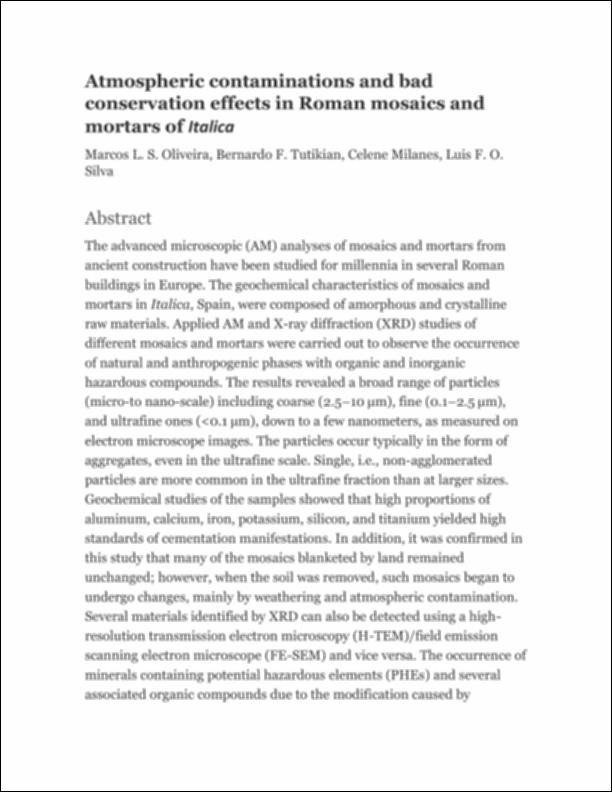 The advanced microscopic (AM) analyses of mosaics and mortars from ancient construction have been studied for millennia in several Roman buildings in Europe. The geochemical characteristics of mosaics and mortars in Italica, Spain, were composed of amorphous and crystalline raw materials. Applied AM and X-ray diffraction (XRD) studies of different mosaics and mortars were carried out to observe the occurrence of natural and anthropogenic phases with organic and inorganic hazardous compounds. The results revealed a broad range of particles (micro-to nano-scale) including coarse (2.5–10 μm), fine (0.1–2.5 μm), and ultrafine ones (<0.1 μm), down to a few nanometers, as measured on electron microscope images. The particles occur typically in the form of aggregates, even in the ultrafine scale. Single, i.e., non-agglomerated particles are more common in the ultrafine fraction than at larger sizes. Geochemical studies of the samples showed that high proportions of aluminum, calcium, iron, potassium, silicon, and titanium yielded high standards of cementation manifestations. In addition, it was confirmed in this study that many of the mosaics blanketed by land remained unchanged; however, when the soil was removed, such mosaics began to undergo changes, mainly by weathering and atmospheric contamination. Several materials identified by XRD can also be detected using a highresolution transmission electron microscopy (H-TEM)/field emission scanning electron microscope (FE-SEM) and vice versa. The occurrence of minerals containing potential hazardous elements (PHEs) and several associated organic compounds due to the modification caused by moisture and pollution was also demonstrated. The results offered important information about the building materials that were used to meet the mechanical requirements of the buildings.
Collections