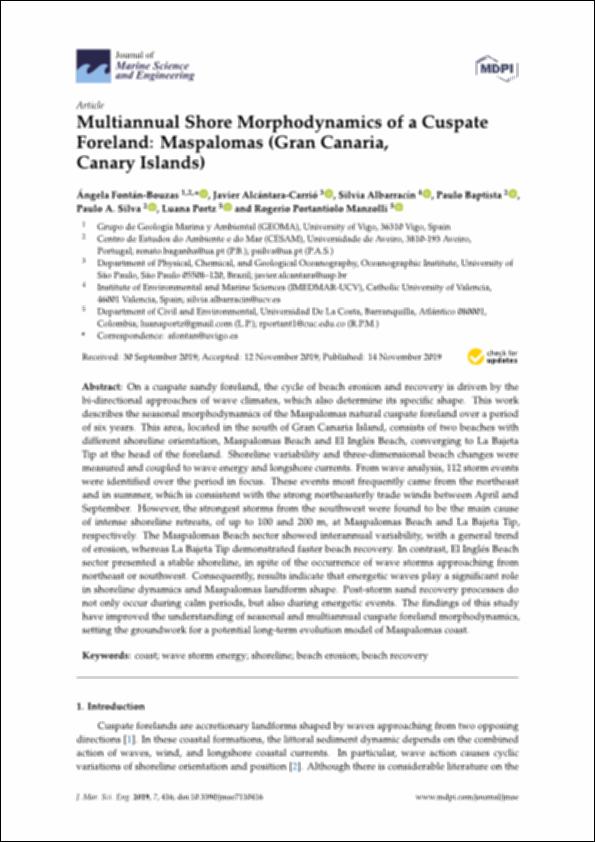 On a cuspate sandy foreland, the cycle of beach erosion and recovery is driven by the bi-directional approaches of wave climates, which also determine its speciﬁc shape. This work describes the seasonal morphodynamics of the Maspalomas natural cuspate foreland over a period of six years. This area, located in the south of Gran Canaria Island, consists of two beaches with diﬀerent shoreline orientation, Maspalomas Beach and El Inglés Beach, converging to La Bajeta Tip at the head of the foreland. Shoreline variability and three-dimensional beach changes were measuredandcoupledtowaveenergyandlongshorecurrents. Fromwaveanalysis,112stormevents were identiﬁed over the period in focus. These events most frequently came from the northeast and in summer, which is consistent with the strong northeasterly trade winds between April and September. However, the strongest storms from the southwest were found to be the main cause of intense shoreline retreats, of up to 100 and 200 m, at Maspalomas Beach and La Bajeta Tip, respectively. The Maspalomas Beach sector showed interannual variability, with a general trend of erosion, whereas La Bajeta Tip demonstrated faster beach recovery. In contrast, El Inglés Beach sector presented a stable shoreline, in spite of the occurrence of wave storms approaching from northeast or southwest. Consequently, results indicate that energetic waves play a signiﬁcant role in shoreline dynamics and Maspalomas landform shape. Post-storm sand recovery processes do not only occur during calm periods, but also during energetic events. The ﬁndings of this study have improved the understanding of seasonal and multiannual cuspate foreland morphodynamics, setting the groundwork for a potential long-term evolution model of Maspalomas coast.
Collections