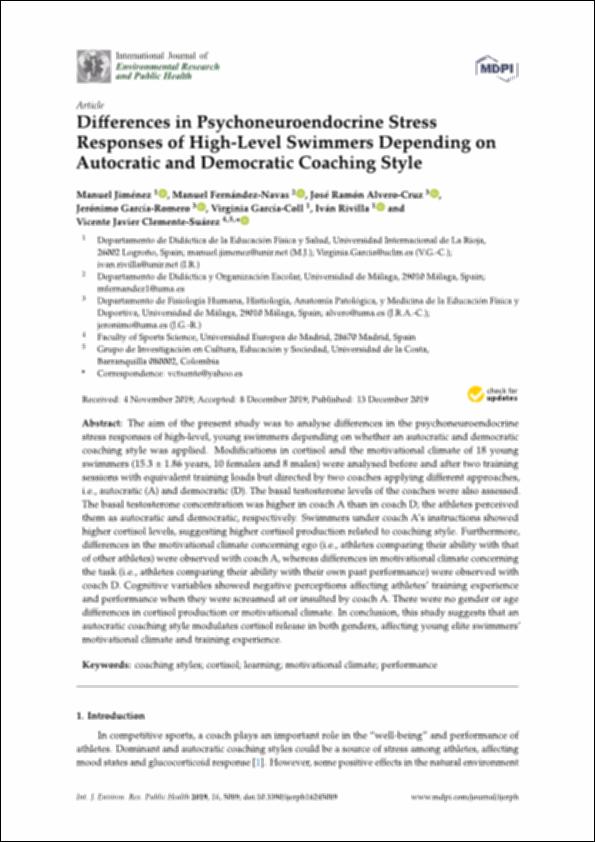 The aim of the present study was to analyse diﬀerences in the psychoneuroendocrine stress responses of high-level, young swimmers depending on whether an autocratic and democratic coaching style was applied. Modiﬁcations in cortisol and the motivational climate of 18 young swimmers (15.3±1.86 years, 10 females and 8 males) were analysed before and after two training sessions with equivalent training loads but directed by two coaches applying diﬀerent approaches, i.e., autocratic (A) and democratic (D). The basal testosterone levels of the coaches were also assessed. The basal testosterone concentration was higher in coach A than in coach D; the athletes perceived them as autocratic and democratic, respectively. Swimmers under coach A’s instructions showed higher cortisol levels, suggesting higher cortisol production related to coaching style. Furthermore, diﬀerences in the motivational climate concerning ego (i.e., athletes comparing their ability with that ofotherathletes)wereobservedwithcoachA,whereasdiﬀerencesinmotivationalclimateconcerning the task (i.e., athletes comparing their ability with their own past performance) were observed with coach D. Cognitive variables showed negative perceptions aﬀecting athletes’ training experience and performance when they were screamed at or insulted by coach A. There were no gender or age diﬀerences in cortisol production or motivational climate. In conclusion, this study suggests that an autocratic coaching style modulates cortisol release in both genders, aﬀecting young elite swimmers’ motivational climate and training experience.
Collections