Quantifying risks and interventions that have affected the burden of lower respiratory infections among children younger than 5 years: an analysis for the Global Burden of Disease Study 2017 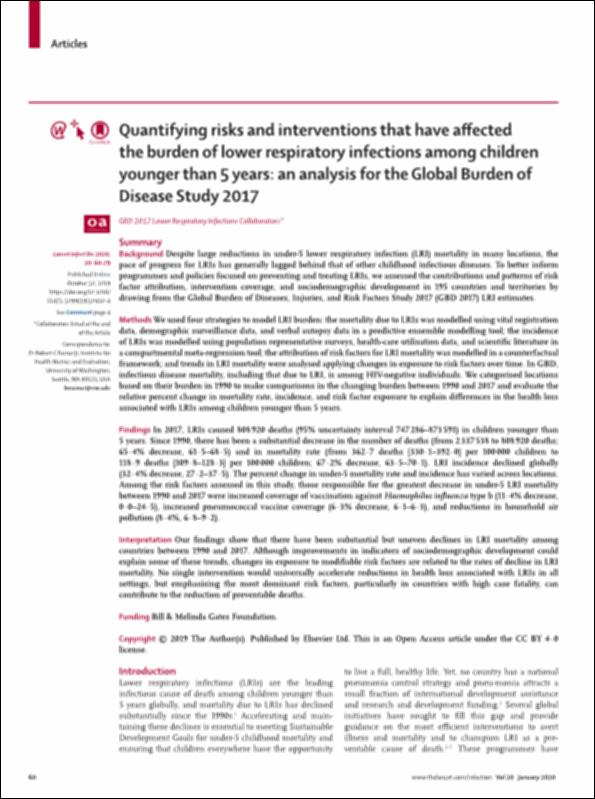 Quantifying risks and interventions that have affected the burden of lower respiratory infections among children younger than 5 years.pdf (2.779Mb)
Author

Background Despite large reductions in under-5 lower respiratory infection (LRI) mortality in many locations, the pace of progress for LRIs has generally lagged behind that of other childhood infectious diseases. To better inform programmes and policies focused on preventing and treating LRIs, we assessed the contributions and patterns of risk factor attribution, intervention coverage, and sociodemographic development in 195 countries and territories by drawing from the Global Burden of Diseases, Injuries, and Risk Factors Study 2017 (GBD 2017) LRI estimates. Methods We used four strategies to model LRI burden: the mortality due to LRIs was modelled using vital registration data, demographic surveillance data, and verbal autopsy data in a predictive ensemble modelling tool; the incidence of LRIs was modelled using population representative surveys, health-care utilisation data, and scientific literature in a compartmental meta-regression tool; the attribution of risk factors for LRI mortality was modelled in a counterfactual framework; and trends in LRI mortality were analysed applying changes in exposure to risk factors over time. In GBD, infectious disease mortality, including that due to LRI, is among HIV-negative individuals. We categorised locations based on their burden in 1990 to make comparisons in the changing burden between 1990 and 2017 and evaluate the relative percent change in mortality rate, incidence, and risk factor exposure to explain differences in the health loss associated with LRIs among children younger than 5 years. Findings In 2017, LRIs caused 808 920 deaths (95% uncertainty interval 747 286–873 591) in children younger than 5 years. Since 1990, there has been a substantial decrease in the number of deaths (from 2 337 538 to 808 920 deaths; 65·4% decrease, 61·5–68·5) and in mortality rate (from 362·7 deaths [330·1–392·0] per 100 000 children to 118·9 deaths [109·8–128·3] per 100 000 children; 67·2% decrease, 63·5–70·1). LRI incidence declined globally (32·4% decrease, 27·2–37·5). The percent change in under-5 mortality rate and incidence has varied across locations. Among the risk factors assessed in this study, those responsible for the greatest decrease in under-5 LRI mortality between 1990 and 2017 were increased coverage of vaccination against Haemophilus influenza type b (11·4% decrease, 0·0–24·5), increased pneumococcal vaccine coverage (6·3% decrease, 6·1–6·3), and reductions in household air pollution (8·4%, 6·8–9·2). Interpretation Our findings show that there have been substantial but uneven declines in LRI mortality among countries between 1990 and 2017. Although improvements in indicators of sociodemographic development could explain some of these trends, changes in exposure to modifiable risk factors are related to the rates of decline in LRI mortality. No single intervention would universally accelerate reductions in health loss associated with LRIs in all settings, but emphasising the most dominant risk factors, particularly in countries with high case fatality, can contribute to the reduction of preventable deaths.
Collections