The global, regional, and national burden of colorectal cancer and its attributable risk factors in 195 countries and territories, 1990–2017: a systematic analysis for the Global Burden of Disease Study 2017

Background Data about the global, regional, and country-specific variations in the levels and trends of colorectal cancer are required to understand the impact of this disease and the trends in its burden to help policy makers allocate resources. Here we provide a status report on the incidence, mortality, and disability caused by colorectal cancer in 195 countries and territories between 1990 and 2017. Methods Vital registration, sample vital registration, verbal autopsy, and cancer registry data were used to generate incidence, death, and disability-adjusted life-year (DALY) estimates of colorectal cancer at the global, regional, and national levels. We also determined the association between development levels and colorectal cancer age-standardised DALY rates, and calculated DALYs attributable to risk factors that had evidence of causation with colorectal cancer. All of the estimates are reported as counts and age-standardised rates per 100 000 person-years, with some estimates also presented by sex and 5-year age groups. Findings In 2017, there were 1·8 million (95% UI 1·8–1·9) incident cases of colorectal cancer globally, with an agestandardised incidence rate of 23·2 (22·7–23·7) per 100 000 person-years that increased by 9·5% (4·5–13·5) between 1990 and 2017. Globally, colorectal cancer accounted for 896 000 (876 300–915 700) deaths in 2017, with an agestandardised death rate of 11·5 (11·3–11·8) per 100 000 person-years, which decreased between 1990 and 2017 (–13·5% [–18·4 to –10·0]). Colorectal cancer was also responsible for 19·0 million (18·5–19·5) DALYs globally in 2017, with an age-standardised rate of 235·7 (229·7–242·0) DALYs per 100 000 person-years, which decreased between 1990 and 2017 (–14·5% [–20·4 to –10·3]). Slovakia, the Netherlands, and New Zealand had the highest age-standardised incidence rates in 2017. Greenland, Hungary, and Slovakia had the highest age-standardised death rates in 2017. Numbers of incident cases and deaths were higher among males than females up to the ages of 80–84 years, with the highest rates observed in the oldest age group (≥95 years) for both sexes in 2017. There was a non-linear association between the Socio-demographic Index and the Healthcare Access and Quality Index and age-standardised DALY rates. In 2017, the three largest contributors to DALYs at the global level, for both sexes, were diet low in calcium (20·5% [12·9–28·9]), alcohol use (15·2% [12·1–18·3]), and diet low in milk (14·3% [5·1–24·8]). Interpretation There is substantial global variation in the burden of colorectal cancer. Although the overall colorectal cancer age-standardised death rate has been decreasing at the global level, the increasing age-standardised incidence rate in most countries poses a major public health challenge across the world. The results of this study could be useful for policy makers to carry out cost-effective interventions and to reduce exposure to modifiable risk factors, particularly in countries with high incidence or increasing burden 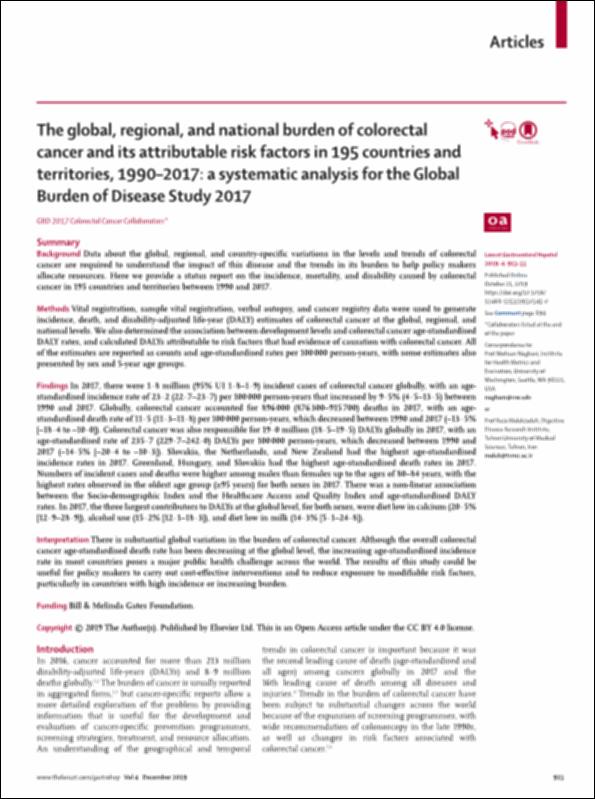